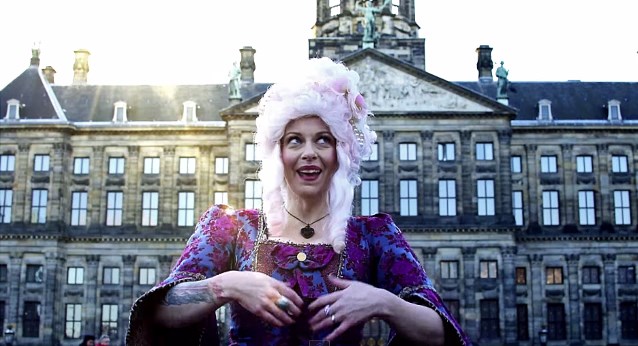 "Heart Of Amsterdam", the new video from THE GENTLE STORM, the collaboration between AYREON mastermind Arjen Lucassen and former THE GATHERING singer Anneke Van Giersbergen, can be seen below. The song is taken from THE GENTLE STORM's debut album, "The Diary", which will be released on March 25 via InsideOut Music.

Says Anneke about "Heart Of Amsterdam": "The song is a tribute to the city of Amsterdam, the hometown of the story's leading character Susanne.

"Seventeenth-century Amsterdam was a center of shipping, shipbuilding, and trade. Amsterdam flourished, and a wonderful city was the result.

"We shot the video in the center of Amsterdam. It was freezing cold and I couldn't move my fingers anymore during the last shots, but it was all worth it. I love how the video turned out!"

Lucassen and Van Giersbergen originally crossed paths in 1998 for AYREON's breakthrough third album, "Into The Electric Castle". Ten years later they teamed up again for AYREON's seventh album, "01011001", both having established themselves as world-renowned heavy metal/rock artists in the decade between releases. Although their respective musical styles went in vastly different directions during that time, Arjen and Anneke retained a common ground that ultimately led to the creation of THE GENTLE STORM.

THE GENTLE STORM's double album is an epic production of AYREON proportions, divided into two parts as a full-on metal assault (CD1) and lighter folk arrangements (CD2). It also heralds Anneke's return to the realms of heavy guitars and soaring vocals reminiscent of THE GATHERING's breakthrough album "Mandylion".

"The Diary" cover artwork can be seen below. Arjen said: "I loved the front cover of the last STREAM OF PASSION album, so I tracked down the cover artist, Alexandra V. Bach. I sent her some samples of the THE GENTLE STORM music, and explained the album concept. She made a moodboard that captured the feel of the story and the music. We then gave her the go-ahead to design the cover. She did an amazing job that exceeded our expectations: Alexandra's cover art represents THE GENTLE STORM perfectly!"

THE GENTLE STORM's album release will be followed by live dates through the spring and summer European festival season.

Known for touring extensively year after year, Anneke will take THE GENTLE STORM on the road backed by well known Dutch talents. Arjen, however, will not be part of the live production.