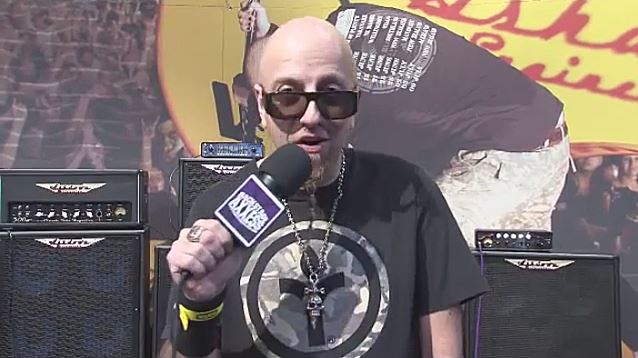 SYSTEM OF A DOWN bassist Shavo Odadjian has confirmed that the band is planning to release new material either later this year or in 2016. He told BackstageAxxess.com at last month's NAMM show in Anaheim, California: "We're always working. [But] I don't wanna give you a time [frame for the release of new music], because I don't wanna be false. But when it's ready, people will hear it."

Shavo also spoke about SYSTEM OF A DOWN's relative reluctance to take part in any large-scale touring. He said: "I would love to play. [But] the band is made of four members — our band — and we're all artists, and we all have lives. I got married, [and] I have two kids."

He continued: "We've been around for 20 years, so you have to sometimes go away and come back with all this new energy and all this new influence and inspiration. So that's what we did.

"Everyone thought we broke up, but we didn't. All we did was gain oomph and gain experience and love each other more and miss each other…"

Shavo added: "We're brothers. I'll take bullets for any one of those guys."

SYSTEM OF DOWN singer Serj Tankian said in a recent interview with RollingStone.com that "there has been talk" of the band recording a new album. Tankian explained, "We are going to play this (upcoming U.S.) tour, come back and we're going to see where we are… The openness is there to work together, but we haven't made any particular plans that we can announce."

Tankian added that a new record depends on whether he and guitarist Daron Malakian have "songs that work for SYSTEM," saying, "I have a few that could apply, but I'm not sure until the time comes where I can actually play them for the guys and see if it's something that vibes off them."

Although the band has been vague for years about its status and internal relationships, drummer John Dolmayan told The Pulse Of Radio a while back that the members of SYSTEM have always been friends. "I think a part of it is people like drama, you know," he said. "They look for it, and they want drama involved, they want SYSTEM to have problems. There's a lot of haters out there, let's face it, and as much as the fans really want the band to get together just so that they can see and enjoy the music again, there's also just as many people that would like to see us not getting along and, you know, no hope of reuniting."

Nevertheless, Dolmayan did hint last year at personal problems within the group. "You know, there's still some drama from the past that we've got to figure out, and the funny thing is that we get onstage, we have a great time," he said. "The last couple of tours have probably been the most fun we've ever had, but I'm a very honest guy. You know, there's problems in this band. But they're problems that can be figured out and we're in the process of doing that. We probably would have been in the studio making an album already, but for personal reasons, one of our members cant be in the studio right now. It's a positive thing, but that's all I can say on that right now."

Tankian, who released a number of solo albums and has been the most musically active member of the band, said that at the moment he's working on a film score. He revealed, "It's actually a really cool score, and it's for a film based on, again, the (Armenian) genocide. That's all I'm dealing with right now. It's called '1915'… It deals with denial and the psychological impacts of a genocide rather than the physical aspects of it."

SYSTEM OF A DOWN last released new music in 2005 with the "Mezmerize" and "Hypnotize" albums, but started to tour again in 2011.

The band will play in Los Angeles on April 6 before launching a string of European dates on April 10 in London.

The tour commemorates the 100th anniversary of the Armenian genocide and will conclude on April 23 with SYSTEM OF A DOWN’s first-ever performance in their homeland of Armenia, in the city of Yerevan.