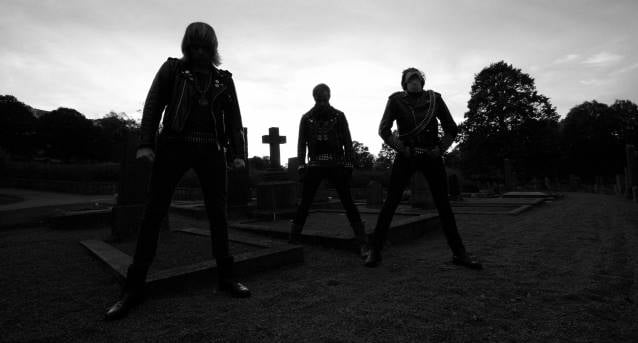 VAMPIRE was founded in 2011 by Hand Of Doom (vocals), Black String (guitars) and Command (bass). The band’s self-titled debut demo, released in September of the following year in different print runs, had a massive impact on the worldwide underground metal scene. Word-of-mouth promotion as well as excellent reviews gained the band a great reputation as being one of the most promising acts from the Swedish death metal scene. A seven-inch version of the demo tape (including one extra track) was released in January 2013 by To The Death Records and sold out in no time. By now, both the demo and the seven-inch have become highly sought after collector’s items despite their total print run of 1,400 copies.

Following the success of the demo and seven-inch, VAMPIRE has built a steady live reputation by supporting some of the most renowned bands in today’s metal scene and by acclaimed performances at the Live Evil and Muskelrock festivals in 2013.

VAMPIRE is currently at Svenska Grammofonstudion finishing the recording of the band's self-titled debut album which is scheduled for a late March 2014 release.

While VAMPIRE's roots reach deep into metal’s most vicious origins, the eleven raw slices contained on the debut album will immediately catch your attention with their refreshingly morbid approach and should be hailed soon as some of the most poisonous metal of the decade.