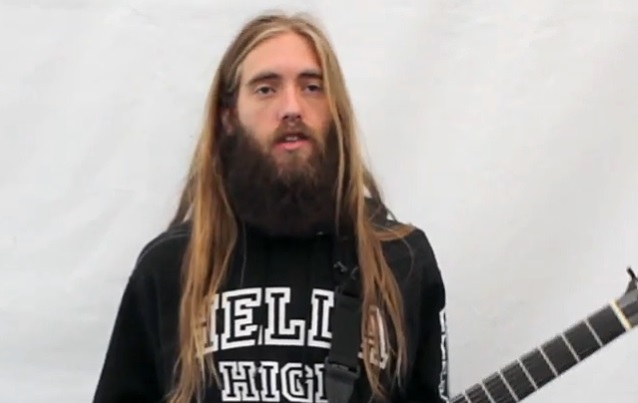 In the six-minute clip below, SUICIDE SILENCE's Mark Heylmun and Chris Garza give U.K.'s Total Guitar magazine a closer look at their ESP and Schecter signature models backstage at the 2014 Download festival.

SUICIDE SILENCE's new album, "You Can't Stop Me", sold around 15,000 copies in the United States in its first week of release to debut at position No. 16 on The Billboard 200 chart.

"You Can't Stop Me" is SUICIDE SILENCE's first album to feature new vocalist Hernan "Eddie" Hermida (ex-ALL SHALL PERISH) and their first since the tragic loss of singer Mitch Lucker. The CD was produced and mixed by Steve Evetts (SEPULTURA, THE DILLINGER ESCAPE PLAN), who worked with the band not only on "The Black Crown", but also on some instrumental demos for the new effort just prior to Lucker's death in the fall of 2012.

The video for the "You Can't Stop Me" title track can be seen below. The clip was directed by Nathan "Karma" Cox, who has previously worked with LINKIN PARK, BLACK VEIL BRIDES and MARILYN MANSON, among many others.

Regarding the decision to enlist Hermida, Heylmun told Metalholic.com: "There was really nobody else — we didn't want to try anybody out. We didn't want to call people and be, like, 'You wanna come and jam with us?' That's not how this situation seemed like it would work for us. Eddie was just a friend. Somebody that we know is extremely talented, and someone that could put the passion behind the job that it is. To not replace Mitch or be the singer of this band, but to treat the gig that it is. He's replacing an idol to so many people and he's also coming into a band that preexists, which is the other four members of it. We just knew he would be able to handle it with respect and knock it out of the park."