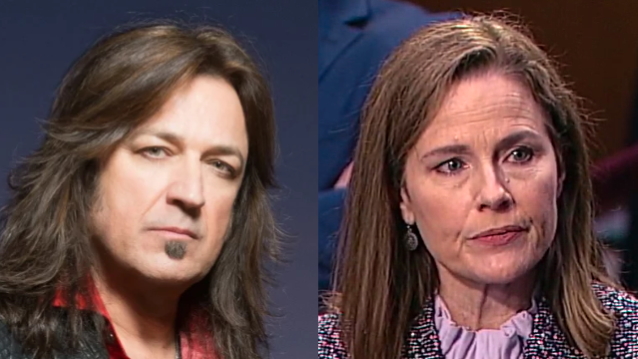 While some Democrats have bashed Barrett for being an extremist because of her Catholic faith and for previously criticizing abortion and a Supreme Court decision concerning the Affordable Care Act, Republicans have defended her by bringing up Barrett's character and strong legal credentials.

Earlier today, Sweet took to his social media to write: "Whatever you may think about the Supreme Court Nomination, Amy Coney Barrett has certainly impressed me. To sit through the grueling process of being questioned under fire for hours upon hours with NO NOTES (yet she did have @starbucks ). She answered the questions with poise, grace, patience, humility and intelligence while actually giving the senators a lesson in law, politics and candor. It was refreshing to watch #amyconeybarrett - absolute genius".

Barrett has close ties to People Of Praise, a charismatic Christian religious group which has conservative stances on the role of women in society and other social issues. Former members of the group say it teaches that wives must submit to the will of their husbands.

Back in November 2016, Sweet drew criticism from some STRYPER fans for posting a picture of Donald Trump and congratulating the real estate mogul for "working his ass off for the presidency of the United States of America."

In early March, Sweet praised Trump's actions that served to ramp up the federal government's response to the COVID-19 epidemic — even after Trump was criticized by some parts of the media for downplaying fears about COVID-19 or actively spreading misinformation about its repercussions.

This past May, Sweet said that he would like to see his band represented by Trump's fourth White House press secretary, Kayleigh McEnany.

In August, Trump said that if Joe Biden, the Democrat challenger for the White House, was elected president, he would "hurt God."

"He's following the radical left agenda — take away your guns, destroy your Second Amendment, no religion, no anything, hurt the Bible, hurt God … He's against God," Trump told supporters during a trip to Ohio.

Whatever you may think about the Supreme Court Nomination, Amy Coney Barrett has certainly impressed me. To sit through...