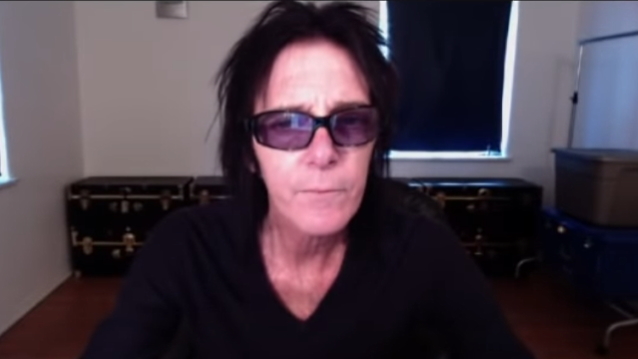 Former L.A. GUNS drummer Steve Riley has blasted Phil Lewis and Tracii Guns, saying the singer and the guitarist "don't like each other" and insisting that the musical reunion between the pair has already "stalled."

Guns and Lewis began working on new music together again in 2016 after playing periodic dates together — billed as "L.A. GUNS' Phil Lewis and Tracii Guns" — around the tour schedule of the other long-running incarnation of L.A. GUNS, which Lewis continued to front. The singer eventually teamed up with Guns full-time and the duo have since released three albums under the L.A. GUNS moniker: 2017's "The Missing Peace", 2019's "The Devil You Know" and this year's "Checkered Past".

Left out of the Guns/Lewis reunion was longtime L.A. GUNS drummer Riley, who sat behind the kit for Phil's other version of L.A. GUNS. After leaving W.A.S.P. in 1987, Riley joined L.A. GUNS and played on the band's most commercially successful albums. However, he and Guns have a fractured relationship, which came to a head in 2002 when Tracii left L.A. GUNS to focus on BRIDES OF DESTRUCTION.

Riley discussed the breakdown of his working relationship with Guns and Lewis in a brand new interview with Waste Some Time With Jason Green. He said (as transcribed by BLABBERMOUTH.NET): "The real effort from Tracii to stop me came when Phil just blew on me that he was gonna get back with Tracii. And that in itself is amazing because… I've told it before, and me and [former L.A. GUNS bassist] Kelly Nickels talk about it, how can those two guys be together right now 'cause they do not like each other. I don't care what anybody says; I know what I know. I was the only one constant factor in L.A. GUNS through all the changes. I know how they talked about each other. I know how they got along when they were together, and they do not like each other. So when Phil came to me saying, 'I'm gonna go and start doing some shows with Tracii,' I was, like, 'Woah! Really?' We were out on the road doing a bunch of dates, and that just came out of nowhere. And I was, like, 'Wow. If that's what you wanna do.' He goes, 'Yeah, it's just gonna be a few dates 'cause he's out of his mind, Steve. I don't know how long it's gonna last.' And I was, like, why even do them? But anyways, he ended up doing them. Then he came back and said, 'I'm going to be leaving and doing Tracii full-time.' And that was midway through 2016 — it was midway through that summer tour. So I had to go for six months knowing he was a lame duck; he was gonna be splitting."

According to Riley, he knew from the get-go that Phil "was making a bad call." He added: "To call that an L.A. GUNS reunion with just the two of them… First of all, it's not a reunion. And then second of all, to do it with him and know their past relationship, know how they tore each other up in interviews and in the press and just said the worst things about each other, I just couldn't understand it; it wasn't registering to me. Why would you wanna do this when you could, at this age, at this point in your career, don't you wanna be comfortable and do it around people that you really dig? So it wasn't really registering why he would wanna do it. I guess they saw big dollar signs, and that didn't happen.

RILEY'S L.A. GUNS features Riley alongside Orlando, Florida-based guitarist/vocalist Kurt Frohlich, Nickels and guitarist Scott Griffin (who played bass for L.A. GUNS from 2007 until 2009, and then again from 2011 to 2014).

RILEY'S L.A. GUNS released its debut album, "Renegades", in late 2020 — made available under the L.A. GUNS banner, before a settlement between the various parties was reached — and is currently in pre-production for a follow-up effort. "It's going really well, 'cause we've got four really great songwriters," Riley told Waste Some Time with Jason Green. "So this is something I'm having fun with right now."

In an interview with Sonic Perspectives, Guns addressed the fact that Riley's version of L.A. GUNS played at the M3 Rock Festival in 2019 and released a full-length album under the L.A. GUNS name. He said: "Dude, when they did those couple of shows, we got so much angry e-mail from our fans. People were, like, 'What the fuck? None of you guys were there!' We would have to explain it's a different band with the same name. When I say a lot, I'm talking over a thousand e-mails. Then they put out a record using the name L.A. GUNS, [and] the e-mails just escalated. That was the point where some from our family stepped who had unlimited funds, which we used to stop this. It was what we needed to do, and it is done. Can you imagine, now they have to make up their legal fees? In what reality is it worth it? For Steve Riley to spend $80,000, and they will never make that back with RILEY'S L.A. GUNS. There is no logic, and it's so bizarre."