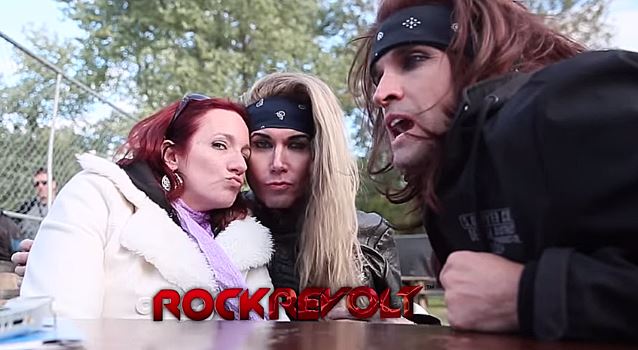 RockRevoltMagazine.com conducted an interview with guitarist Satchel and bassist Lexxi Foxx of Los Angeles glam-metal jokesters STEEL PANTHER at the inaugural installment of the Louder Than Life festival, which was held on Saturday, October 4 and Sunday, October 5 at Louisville Champions Park in Louisville, Kentucky. You can now watch the chat below.

STEEL PANTHER is currrently supporting JUDAS PRIEST on a North American tour. The trek kicked off on October 1 in Rochester, New York and will run through mid-November, wrapping up in Tacoma, Washington. The tour will make stops in major markets, including Brooklyn, Detroit, Baltimore and Los Angeles.

Asked if opening for JUDAS PRIEST has resulted in STEEL PANTHER changing any aspect of its performance, singer Michael Starr told Patch.com: "Not really. We pretty much forge forward the same way we would do it in front of a crowd that knows who we are. We've had a lot of experience playing festivals before a bunch of people that have never seen us and we just do what we do, no matter what. It's challenging too, because you have to realize that just because they're not screaming your songs, it doesn't mean they don't like you. Usually by the end of our show, people are fans or hate us. Nobody leaves our show going, 'They're pretty good.' They just go, 'I hate them' or 'I love them.'"

STEEL PANTHER's third album, "All You Can Eat", sold around 13,000 copies in the United States in its first week of release to land at position No. 24 on The Billboard 200 chart. The CD arrived in stores on April 1 via Open E/KLS.