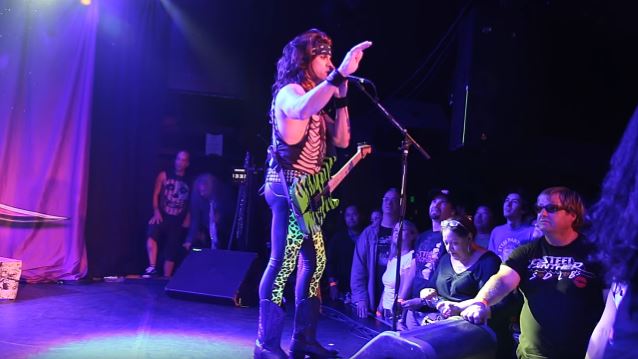 During STEEL PANTHER's November 9 concert at The Roxy in West Hollywood, California, Satchel addressed the previous night's election results that mean billionaire real estate developer Donald Trump will be the next American president. "There's some people here that are sad," the guitarist said (see video below). "Let me tell you something, people: the sun will come out tomorrow. Okay?

"We've been playing Roxy since 1981. We played here back when people thought that Reagan was a shitty president. Okay? It's gonna get better.

"Listen, we're gonna make all the women here feel a little bit better. We're gonna have a 'Fuck Trump' party after the fucking show. I'll put on a Donald Trump mask and you can fuck us all you want."

Members of SLIPKNOT, MÖTLEY CRÜE, TRIVIUM, ALL THAT REMAINS, MY CHEMICAL ROMANCE, BEARTOOTH and others are among the rockers who have reacted on social media to Trump winning the presidential election in the early hours of Wednesday morning (November 9).

SLIPKNOT singer Corey Taylor was among the most vocal critics of the president-elect, writing on Twitter: "I didn't think my country could be this fucking stupid or hateful. I'm disgusted. I won't tell you 'I told you so' when he tries to fuck you." He later added, "Do yourself a favor: find some friends in the black/latino/LGBT+ communities tonight. They're going to need your help — possibly protection."

Kid Rock congratulated Trump with a video of the reality TV star's rallies set to his song "American Bad Ass".

ALL THAT REMAINS singer Philip Labonte, who leans conservative, wrote, "It's literally idiocracy."

Trump shocked the political establishment and the world by becoming the 45th president in one of the biggest upsets in U.S. political history. He won with 289 electoral votes compared to 218 for Hillary Clinton. 270 were needed to win.

While many rock artists had been against Trump, artists like STAIND's Aaron Lewis, Kid Rock and FIVE FINGER DEATH PUNCH's Zoltan Bathory had thrown their support behind the real estate magnate, who has no previous governing experience.