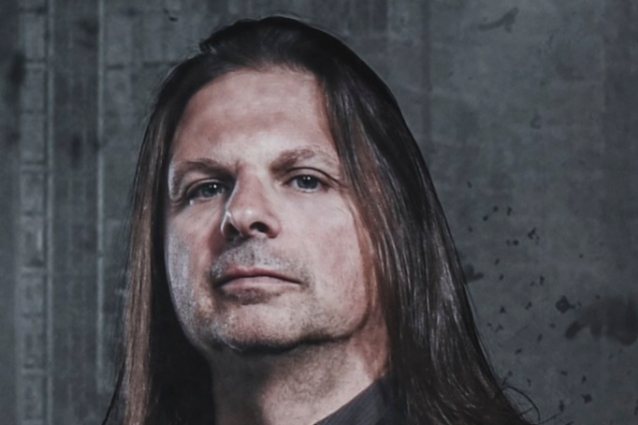 STAIND guitarist Mike Mushok says that Jason Newsted shut down the NEWSTED band because it "cost him a ton" to keep the project alive.

Back in February 2014, Newsted canceled an appearance at Australia's Soundwave festival with NEWSTED, citing "private and personal circumstances." The cancelation followed more than a year of intense touring and promotional activity surrounding the release of NEWSTED's "Metal" EP and follow-up album, "Heavy Metal Music", both of which were positively received by the critics and fans alike.

Mushok, who joined NEWSTED in March 2013 and played on "Heavy Metal Music", told "The Jasta Show" that Jason ultimately pulled the plug on the band because it wasn't financially viable for him to continue playing.

"I think he was happy with it [creatively]," Mike said. "I think the touring thing was hard. I don't think it was exactly what he expected it was going to be. But listen, it was fun. I really enjoyed him. I really enjoyed our time together and playing. We're still friends; we still communicate… We were playing smaller places, but the shows were always good; they were always fun. I just think it cost him a ton. 'Cause he was footing the bill for everything. So I think that at the end of the day, he's, like, 'I'm doing this 'cause of my passion for it and what I love, but I'm bleeding here.' We had this European tour that I think cost him a bunch."

Explaining that he is "really thankful" for the "great experience" of playing with Jason, Mike praised his former bandmate, saying: "Jason is a hard worker, man. We would practice 10 hours, he'd record the whole thing, and when we were done, he wouldn't walk out of the control — he'd sit there and listen to it. I'm, like, 'Dude! Come on, man.' I mean, there's a hard work — I'm a hard worker, but this guy was next level."

In addition to Jason and Mike, NEWSTED's lineup included Jesus Mendez Jr. (THE NAPOLEON BLOWNAPARTS) on drums and Jessie Farnsworth on guitar.

In a 2017 interview with Ultimate Guitar, Jason said that it was "too much of a load" having to "wear all the hats and doing the writing, singing, playing and paying for everything" while NEWSTED was alive.

Jason explained: "It cost me an awful lot of money — hundreds of thousands of dollars to take the NEWSTED band around to the 22 countries we played. But it was worth it for the lessons I learned and the respect that was shown to us and the camaraderie of the band. But I couldn't continue because the business is such a harsh thing now and so different than what I had known."

"Heavy Metal Music" sold nearly 8,000 copies in the United States in its first week of release to land at position No. 40 on The Billboard 200 chart. The CD was made available in August 2013 in North America via Chophouse Records/Collective Sounds and in Europe through Spinefarm Records.