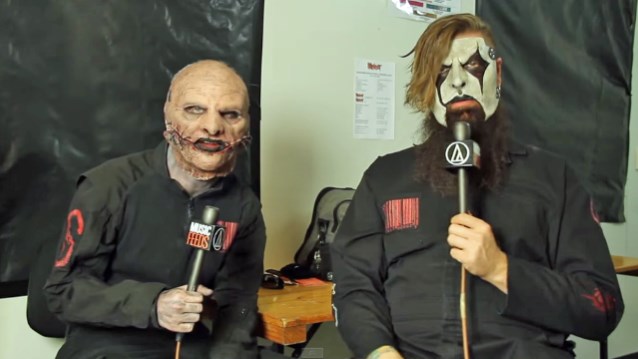 Music Feeds conducted an interview with SLIPKNOT vocalist Corey Taylor and guitarist Jim Root during this year's Soundwave festival in Australia. You can now watch the chat below.

Speaking about the fan reaction to SLIPKNOT's new album, ".5: The Gray Chapter", Corey said: "I think they were waiting for it. They were waiting for us to kind of share the story. And it's a heavy story, but at the same time, the music takes you so many different places that I don't think they were expecting. So I think, on one hand, it was the album that they knew they were gonna get. And on the other hand, they were completely surprised by just how far we were gonna take it."

He continued: "I think the reception has been fantastic. It debuted at No. 1 in a bunch of different [countries]. You hope for that. But at the same time, you don't write music for that. We started with us, and we liked it, and it goes to the fans, and then after that, it's out of our hands."

"We've had a couple of days of practice," Root said. "We know our way around it at this point. Where we're from and what we do and the dues that we paid, we have a work ethic, and it's a very diligent and hard work ethic. And we stick with it. And we are passionate about what we do. And I guess that's where it all comes from. It's really simple and on the surface, but that's really what it is."

Added Corey: "There's a lot of bands in our position who maybe take it for granted sometimes. We've been around long enough to see some ups and downs — not only on our part, but on bands that we used to tour with. So we know both sides of it, and we don't take anything for granted anymore. We go up there with that mindset of, 'Let's earn it again. Let's do it again. Let's go for it again.' And it's kept us in pretty good stead."

"Custer" is the latest single from ".5: The Gray Chapter", which came out in October.

The summer jaunt follows a brief spring run that SLIPKNOT will launch on April 25 in Fort Myers, Florida, ending on May 16 in Grand Rapids, Michigan.