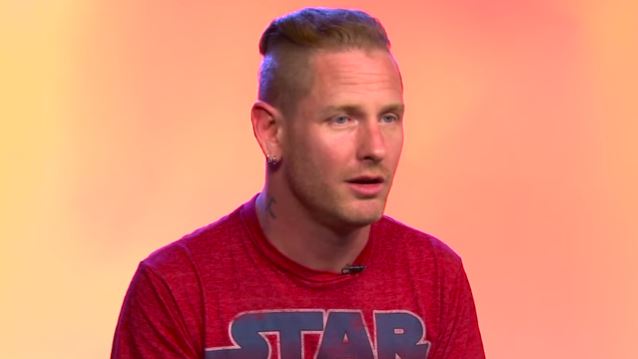 SLIPKNOT and STONE SOUR frontman Corey Taylor recently spoke to Radio.com about why young metal fans tend not to care about the roots of the genre. Check out the clip below.

Said Corey: "I think there's a resistance today… and I don't know if it was like that before. 'Cause when I was growing up, if I heard about people's influences, I went and checked them out. Now, I think people are resistant to anything that feels historical, that feels dated — maybe because there's such a divide between our generation and this generation. Just because it's much more stand-offish. They are the first generation to have this digital thumb in their mouth. You know, the little brats… And you can hate me all you want; I don't give a fuck. That's what you are. Get off your phone and cross the street."

He continued: "Now, when a band gives their list of influences, [the kids today] don't hear anything like that; they just wanna watch them talk. They just wanna watch their face talk. They just wanna watch sounds come out of that face. They're not getting any information. Now, if they read it on Twitter, or whatever, 'Oh, maybe I'll check that out.' But they can't just accept the fact that that band that they love so much might have gotten influenced by, like, six or seven bands, that if it wasn't for those bands, this band wouldn't exist. They can't accept that. That band is the end-all, be-all. And it's almost, like… You wanna talk about ageism. But it's also the start of severity in opinion and righteousness."

Taylor added: "That's one of the reasons why you get so many trolls on the Internet that will just attack you. God forbid you punctuate something wrong. It's, like, 'Well, I'm not gonna listen to you, 'cause you're an idiot.' And then they spell 'you're' y-o-u-r. And it's, like, 'Ah, that's great.'"

Corey Taylor released his third book, "You're Making Me Hate You: A Cantankerous Look At The Common Misconception That Humans Have Any Common Sense Left", on July 7 via Da Capo Press, a member of the Perseus Books Group. The book acts as a commentary on society and pop culture and has been described as "Taylor's take on Peter Griffin's 'You Know What Really Grinds My Gears'."

Taylor promoted the book with a combination of bookstore events and a solo tour which were one-of-a-kind shows featuring readings from the book, acoustic performance, and audience discussion.