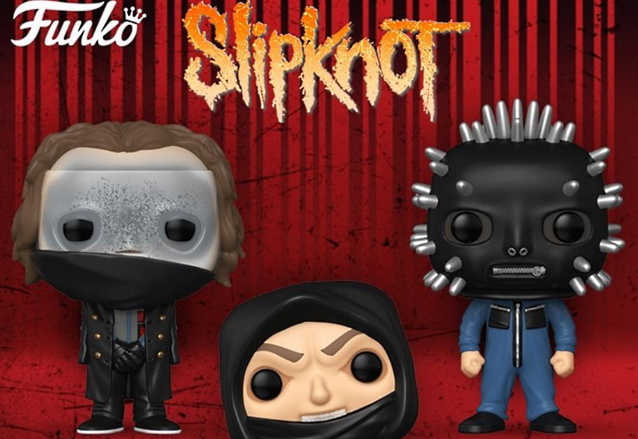 The popular vinyl collectible company Funko — best known for its big-headed Pop! figures — has teamed up with SLIPKNOT for one of its latest artist collaborations.

Pre-orders for figures of frontman Corey Taylor, programmer/sampler Craig Jones and DJ Sid Wilson, are now available at Slipknotmerch.com. Figures of some of the other members of SLIPKNOT will apparently follow at a later date.

Other artists who have gotten the Pop! Rocks treatment in the past include KISS, IRON MAIDEN, METALLICA, GUNS N' ROSES, AC/DC, Ozzy Osbourne, DEF LEPPARD and Rob Zombie.

A Funko vinyl Pop! figure, or popularly known as a "Pop!", is packaged carefully inside a box with a transparent front. The figurine is made out of vinyl and may come as a bobblehead.

Funko reported that these figurines increased its sales by 38 percent in the second quarter of 2019. International sales spiked 65 percent to $68.5 million, while U.S. revenue grew 26 percent to $122.7 million.