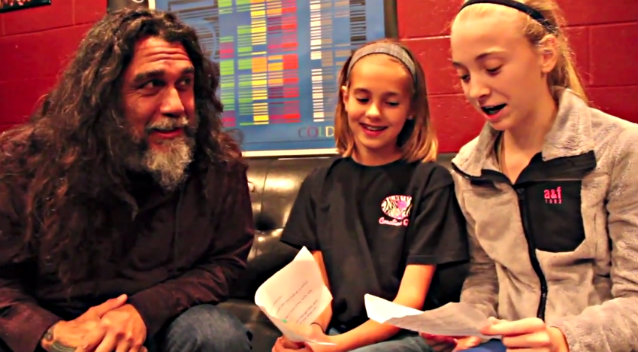 "Kids Interview Bands", a video interview series hosted by 7th-graders Olivia and Connie, conducted an interview with SLAYER bassist/vocalist Tom Araya on November 17 at at The LC in Columbus, Ohio. You can now watch the chat below.

SLAYER kicked off its North American tour on October 25 at the The Joint at Hard Rock Hotel & Casino in Las Vegas, Nevada.

SLAYER is performing many of the band's most classic and fan-favorite songs, all of which were originally written and released between the group's inception and the 1990 gold disc "Seasons In The Abyss".

Bostaph was SLAYER's drummer from 1992 until 2001 and recorded four albums with the band — the gold-certified "Divine Intervention" (1994), the 1996 punk covers album "Undisputed Attitude", "Diabolus In Musica" (1998), "God Hates Us All" (2001) that received a Grammy nomination for "Best Metal Performance", as well as the DVD "War At The Warfield" (2001), also certified gold. In addition to SLAYER, Bostaph has been a member of FORBIDDEN, EXODUS, SYSTEMATIC and TESTAMENT.

Original SLAYER drummer Dave Lombardo sat out the band's Australian tour in February/March due to a contract dispute with the other members of the group. Filling in for him was Jon Dette (TESTAMENT, ANTHRAX).