Like a lot of good music, Riot Fest began in a basement, when a rabid fan wanted to connect his favorite bands with like-minded music lovers in Chicago. Fifteen years and 1,500+ bands later, Riot Fest returns to Douglas Park with a stacked array of bands to score the festivities — featuring many friends of Riot Fest returning to pay tribute to the festival and its loyal fans, alongside iconic and emerging artists who reflect the broad musical tastes the festival is known for.

BLINK-182, after having to cancel its Riot Fest 2018 show due to health issues, return to play this year's festival. SLAYER will perform its final Chicago and Milwaukee show at Riot Fest, and the recently reunited BIKINI KILL — widely considered to be the pioneer of the riot grrrl movement — will join the ranks of unforgettable Riot Fest reunion shows. What's more, THE RACONTEURS will perform in Chicago for the first time in 11 years, and Riot Fest alumni RISE AGAINST, who played the first outdoor Riot Fest in 2012, will join the party as well.

Special to 2019's event, Riot Fest attendees will not just get to see SLAYER perform its final Chicago and Milwaukee shows, but also witness THE B-52S' last Chicago show — plus, fans will be treated to rare full album performances by returning Riot Fest favorites THE FLAMING LIPS (performing "Yoshimi Battles The Pink Robots") and WEEN (performing "The Mollusk"). BLOC PARTY will perform "Silent Alarm" in celebration of the album’s 15th anniversary, and the recently reunited AVAIL will perform "Over The James" from start to finish, adding to a total of 13 album performances this year.

Founded in 2005, Riot Fest features the best of punk, rock 'n' roll, hip hop, metal, alternative, and just about everything in between. Founder Riot Mike is credited with helping to reunite iconic bands like NAKED RAYGUN, THE REPLACEMENTS, MISFITS and JAWBREAKER, among other reunions — a staple feature of Riot Fest, alongside the full album performances, freak shows, carnival rides, and occasional butter sculptures. 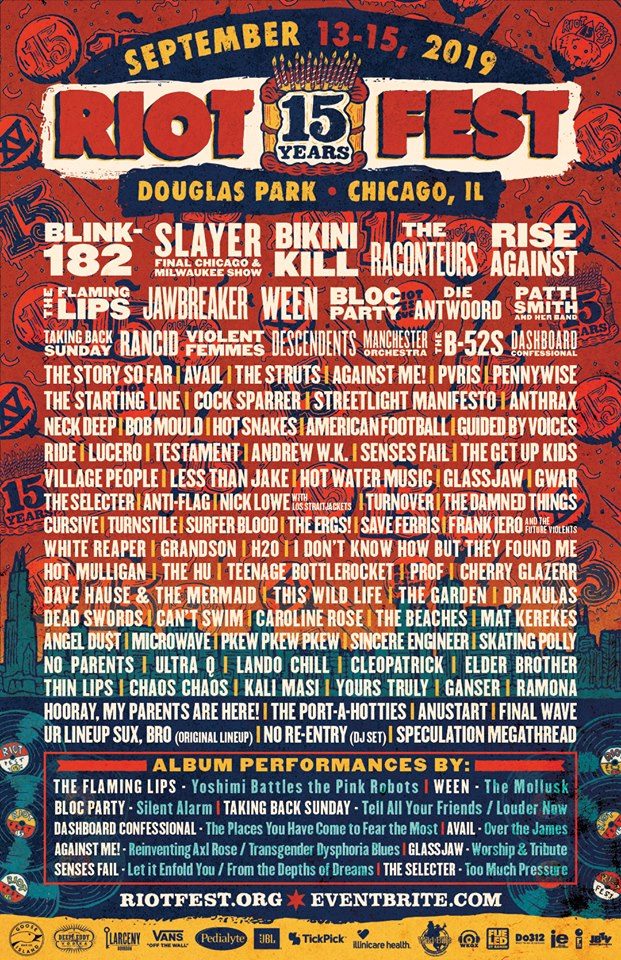