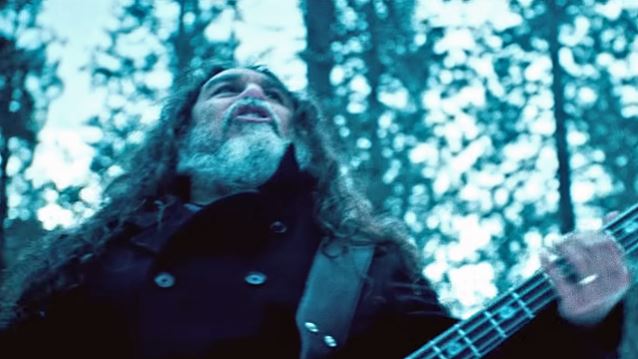 A teaser for SLAYER's video for the song "Pride In Prejudice" is available. The clip was directed by BJ McDonnell, who previously worked with SLAYER on the "Repentless" and "You Against You" videos.

"Pride In Prejudice" was the last song that SLAYER guitarist Kerry King put together musically for the band's latest album, last year's "Repentless". "There were like six or eight other songs already done with keeper drums, keeper guitars, and keeper bass," he told ARTISTdirect. "There were no leads or vocals because I had just gotten done writing music. 'Pride' was the last one I made up that actually made the record. I was going to save that for the next record, because I was just done working at that point. Tom [Araya, vocals] wanted to work on it and I said, 'Sure, man, knock yourself out.' He basically did the vocals on his own."

He continued: "That clean intro, I was just waiting for Paul [Bostaph, drums] to come back inside. I think he was outside on the phone at rehearsal. I was just dicking around on guitar playing that clean part. He asked, 'What's that?' I said, 'I don't know. I just made it up.' That's how simple things become SLAYER songs. It's 'remember it, record it on something, and come back to it.' That song's 'BLACK SABBATH heavy.' That's what I call it, because it's just heavy as fuck."

"Tom had most of those lyrics for 20 years," he added. "I remember he wrote them for 'Divine Intervention'. They never panned out. They show up here on this song. Yeah, it's a new record, but that shit's twenty years old."

"Repentless" was released on September 11, 2015 via Nuclear Blast. The follow-up to 2009's critically acclaimed, Grammy-nominated "World Painted Blood" was produced by Terry Date, who has previously worked with PANTERA, DEFTONES and SOUNDGARDEN. The artwork was created by Brazilian artist Marcelo Vasco in collaboration with Tom Araya and Kerry King.

SLAYER's seven-week North American tour with ANTHRAX and DEATH ANGEL will kick off in Cleveland on September 9 and will hit both major and secondary markets across the continent.