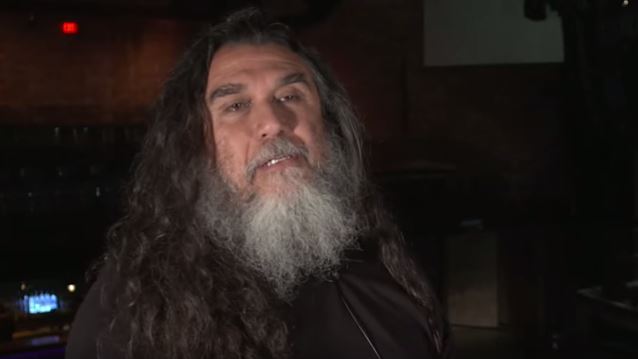 The Smithsonian Institute's National Museum Of History has just posted a profile of SLAYER and the "Origins Of Thrash" as part of its "Places Of Musical Innovation" exhibit. Check it out below.

Asked if the thrash acts shared any fans with glam bands in the '80s, SLAYER guitarist Kerry King told LA Weekly: "It wouldn't surprise me if eventually. What we were doing — and METALLICA and MEGADETH — was more street. That's how those things pan out. I knew there was going to be a big wave of people getting into metal again when DISTURBED and GODSMACK started getting big. These people get tired of this and look for the next thing. And even though we're not the next thing, we're the next level of rage, so to speak."

SLAYER's new album, "Repentless", will be released on September 11 via Nuclear Blast. The CD's title track is now on sale digitally virtually everywhere, including on Amazon, iTunes and Google. The artwork was created by Brazilian artist Marcelo Vasco in collaboration with the band's Tom Araya and Kerry King.

"Repentless" was produced by Terry Date, who has previously worked with PANTERA, SLIPKNOT and SOUNDGARDEN.

"Repentless" will be made available in a wide array of formats, as detailed below: