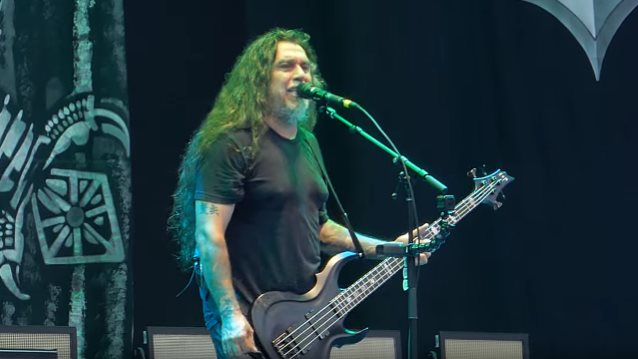 SLAYER is selling 18"x24" collectible plaques commemorating the 30th anniversary of the band's classic 1986 album "Reign In Blood". This will only be made once in a limited edition of 50. The plaques contain a certificate of authenticity plate that is numbered. The setlist reproduction portion is signed by bassist/vocalist Tom Araya and guitarist Kerry King. The cover artwork within the frame is 12"x12" and from the original vinyl album cover. This plaque also contains a reproduction of a concert ticket stub from the November 3, 1984 show. A late October release is expected.

To pre-order your copy, go to Slayer.net.

In a 2009 interview with Filter magazine, SLAYER Araya stated about "Reign In Blood", "On that first album [together], [producer Rick] Rubin made sure that he recorded. He wanted to duplicate what he was hearing." King added, "It was the first time you actually heard SLAYER in its pure ferocity, and it made a big difference. One funny thing about that album is if it came out today, no one would give a shit. They'd say, 'That's cool.' But at the time it came out it made such a difference. People still reflect on that as a poignant time, where shit changed."

"Reign In Blood" was released on October 7, 1986 through Def Jam Recordings. The album was the band's first collaboration with record producer Rick Rubin, whose input helped the band's sound evolve. Kerrang! magazine described the record as "the heaviest album of all time," and a breakthrough in thrash metal and speed metal.

"Reign In Blood"'s release was delayed because of concerns regarding its graphic artwork and lyrical subject matter. The opening track, "Angel Of Death", which refers to Josef Mengele and describes acts such as human experimentation that Mengele committed at the Auschwitz concentration camp, provoked allegations of Nazism. However, the bandmembers stated numerous times they do not condone Nazism, and are merely interested in the subject.

On the topic the controversy surrounding "Reign In Blood"'s lyrical content, SLAYER guitarist Jeff Hanneman said, "'Angel Of Death' was a big problem. I remember getting a phone call after the album was done: Sony wasn't going to release it. I remember being at home, pissed, throwing things. What the fuck? I didn't think anything was wrong with 'Angel Of Death' or anything else we did, it's a documentary! There's no 'Heil Hitler' or 'white people rule,' it's a documentary; grow up, people. It took months before they picked it up again. Finally, we got signed by a distributor."

"Reign In Blood" was SLAYER's first album to enter The Billboard 200 chart (at No. 94). The LP was certified gold by the RIAA (Recording Industry Association Of America) on November 20, 1992 for sales in excess of 500,000 copies. 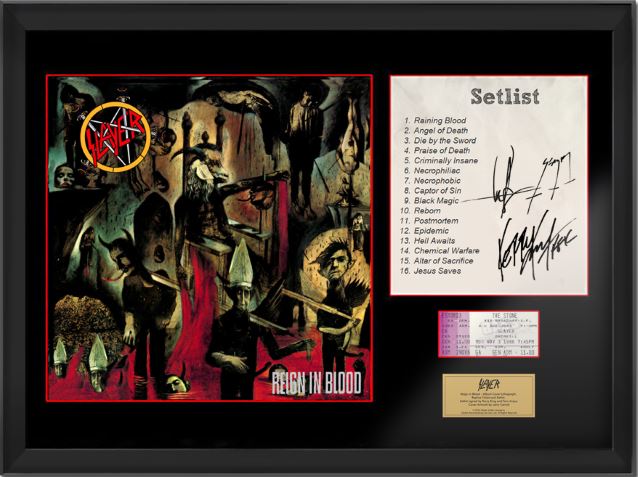