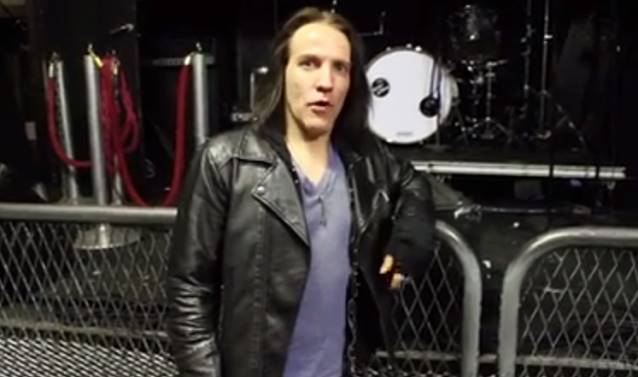 On November 13, Radiosuicide Photography's RSPTV conducted an interview with SKID ROW drummer Rob Hammersmith in Gothenburg, Sweden. You can now watch the chat below.

SKID ROW's latest EP, "United World Rebellion - Chapter One", was released in Europe on May 24 via Germany's UDR Music. The European version of the EP includes two bonus tracks, both of them cover tunes: "Fire Fire" (EZO) and "United" (JUDAS PRIEST).

"United World Rebellion - Chapter One" sold around 1,500 copies in the Unted States in its first week of release. Released in North America on April 16 via MRI, the effort is the first in a series of EPs that the reincarnated band — Dave "Snake" Sabo (guitar), Rachel Bolan (bass), Scotti Hill (guitar), Johnny Solinger (vocals) and Rob Hammersmith (drums) — plans to release in the near future.

In a recent interview with Metalshrine, SKID ROW bassist Rachel Bolan stated about the band's decision to release a series of EPs: "The reason we're doing it is because we wanted to try something different and try a different angle.

"We're old school and we've always put out a full-length and then toured for a year and a half or whatever.

"Technology moves so fast and information overload kinda rules the day, so we went, 'Why don't we put together seven songs and put out three chapters over the next two years?' Snake [guitarist Dave Sabo] and I were talking about it and when we told the rest of the band they were into it and our label loved it.

"The main reason is to put out some new music and tour after that and then more new music and tour after that. Keep everything fresh. And then another reason was the economic factor. It's a lot easier for a SKID ROW fan to put down 6 dollars instead of having to shell out 17 for a full-length. I think some people are still not sure about it, because it is a different way of doing things, but we just did it because we thought it would be a cool idea to have a concept.

"It was seven years between "Revolutions Per Minute" and "United World Rebellion" because we toured so much, and honestly, one night, I forget who said it, it was Scotti [Hill, guitar] or Snake, 'Man, we haven't put out new music in a really long time.' And we were, like, 'Nah, it's been like two or three years.' We started thinking and it was, like, 'No, it's been like seven years.' [laughs]

"From a songwriter's standpoint, it's a lot less pressure. It keeps your chops up as a songwriter and there's always something for the band to do; there's never really any down time. Between writing, recording and touring, for this whole year, we've probably only taken two weeks completely off. After our last two shows in Texas in December, we'll take a Christmas break, two weeks off and then back into the studio in the middle of January."