"Bad news... Illness of a close family member of one our band mates unfortunately has forced postponement of East Coast Armageddon until late January continuing into February. Our sincerest apologies to all of our fans. We will see you all in January."

Capital Chaos TV has uploaded video footage of SIX FEET UNDER performing the song "Shadow Of The Reaper" on July 17 at the DNA Lounge in San Francisco, California. Check it out below.

SIX FEET UNDER earlier in the year parted ways with drummer Kevin Talley and replaced him with Marco Pitruzzella.

SIX FEET UNDER's tenth full-length album, "Unborn", was released on March 19 via Metal Blade Records. The follow-to to 2012's "Undead" was mixed by Chris "Zeuss" Harris, who has previously worked with SUICIDE SILENCE, ALL THAT REMAINS, SHADOWS FALL and SOULFLY, among others.

"Unborn" was released as an exclusive European box-set edition which included the limited digipak of "Unborn" and a bonus track entitled "Illusions". Additionally the box featured a poster, a patch, two pins and a sticker plus enough space for last year's "Undead" album. The bonus track was featured on the vinyl version of "Unborn" as well. 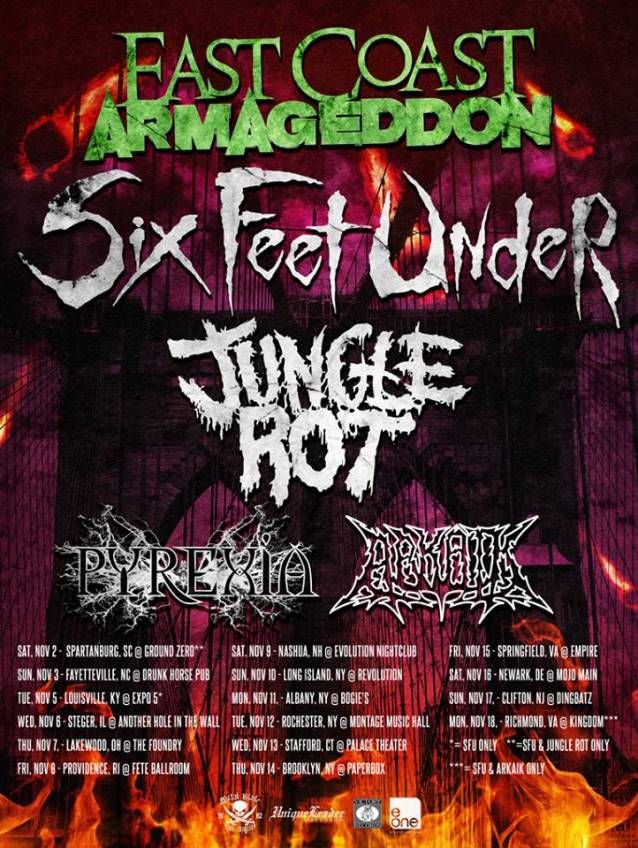