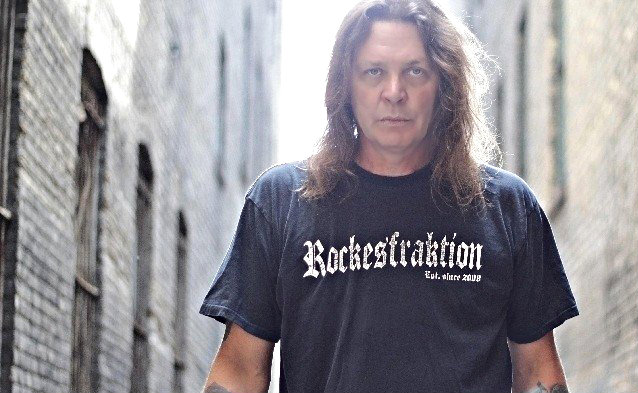 Mark Dean of Myglobalmind webzine recently conducted an interview with American singer David Reece, whose most notable early releases were ACCEPT's 1989 album "Eat The Heat" and BANGALORE CHOIR's 1992 classic "On Target". A couple of excerpts from the chat follow below.

Myglobalmind: Your latest musical offering is with the band EZ LIVIN'. Were you previously familiar with the band and their history? How did you come to link up with [BONFIRE guitarist] Hans [Ziller] and record the album? Did you actively contribute to the lyrical writing for the release or was it already written? Will they become a full-time project for you musically, or will you continue to operate in other musical guises?

Reece: Well, I had met Hans Ziller before with BONFIRE at Firefest while I was with BANGALORE CHOIR in 2010. We hung and chatted a bit then and I was familiar with BONFIRE. Love their stuff. That is kind of how this all started, there was another project with Michael Voss I was singing on and Hans was playing guitar. So when Hans was looking for a singer for EZ LIVIN', Michael suggested he talk to me. Except for the remakes, yes, I co-wrote them with John Wilde. Of course I will still do my solo work, I will never stop being me. Hans and I worked very well together and we will see where it takes us.

Myglobalmind: You have had a wide and varied musical career,generally in the field of melodic rock with your solo and BANGALORE CHOIR releases. However, one album that appears to have differed and a release that I personally have is your "Eat The Heat" with ACCEPT. How did you come to join ACCEPT in what many would have viewed as a clear musical departure for you. Did you view it as a new challenge and did that bring a huge amount of expectation and pressure as they were already an internationally established band with a huge legacy? Did you not feel it musically restrictive that there already was a defined ACCEPT sound?

Reece: Well, I was a change ACCEPT was looking to make at that point in their careers. Of course it was incredible amount of pressure and expectations! I mean, ACCEPT was huge at the time and their fans loved Udo [Dirkschneider]. So it was not going to be an easy task for me at all — almost unfair, to be honest. But I just did what I do and did the best I could. It actually made it even more difficult for me because not only was ACCEPT changing a singer that everyone loved, they were trying to change their sound. A great experience, but an uphill battle all the way around.

Myglobalmind: How do you view your extensive musical legacy? Any particular highs and lows during your time in the music industry. What particular key life lessons has it taught you?

Reece: Of course ACCEPT was a huge high. It really broke me out of where I was at the time. I guess the low was when I decided to take a break for a few years. It taught me that I am doing what I need to be doing, making music. That was kind of the basis of the song "Where My Heart Belongs" from my last solo record. You know, your [heart] will lead you to where you belong; just follow your heart.

Myglobalmind: What do you complain about, what annoys or even angers you?

Reece: People that don’t try or just give up bother me. People trying to take what I've earned angers me. Like illegally downloading music angers me. I work hard at what I do, as do other musicians, and for some web site to steal it from us and give it away for their gain drives me crazy. How can a pro musician make a living if they can't get paid? If people don't stop doing it, there will be no pro musicians left. Quality of music will really go downhill. Please, everyone, support live music!!! It is all we have left and that is slowly going downhill as well.

Myglobalmind: How have you changed since you first stared in music?

Reece: When I first started out, I had big dreams and hopes, probably just like everyone else does. But there is a reality that you just don't get until you have lived it. I have grown in many ways since I started in this business and even had to take a break to figure it all out. I've grown as a person and matured as a musician. I am in the best place I could possibly be — following my heart.