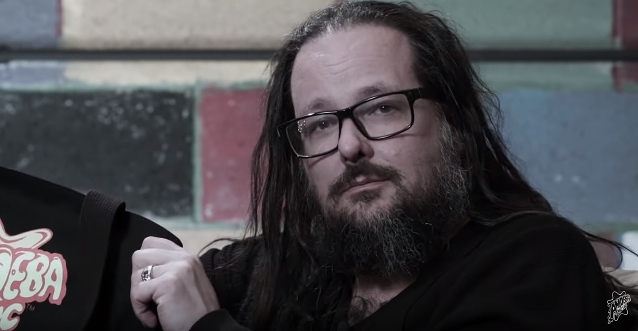 KORN frontman Jonathan Davis is featured in Amoeba Music's "What's In My Bag?" segment in which he talks about some of the records, books and movies he is into.

In the clip below, he can be seen shopping at Amoeba in Hollywood, where he talks about various records from CHRISTIAN DEATH, DEAD CAN DANCE, NINE INCH NAILS and PETER GABRIEL, among others.

Jonathan filed for divorce from Deven in 2016, citing "irreconcilable differences," and requested a domestic violence restraining order against her just a few hours before she was found dead in a Bakersfield, California hotel room.

After a drug relapse in July, Deven sought treatment at Bakersfield Behavior Health Center. She moved into a sober living home until she checked out August 10 — a week before her body was discovered in a hotel room at the Extended Stay. The cause of death is pending toxicology results.