SHINEDOWN has announced the "Shinedown: Deep Dive Tour", an intimate run of spring 2020 dates that will see the band diving into its extensive catalog to perform an array of deep cuts and B-sides along with their biggest hits. Kicking off April 15 in Chattanooga, Tennessee and wrapping May 19 in Las Vegas, Nevada, the tour will include stops in Memphis, Houston, Austin, back-to-back nights at the House of Blues in Dallas, San Francisco, Los Angeles at the legendary venue The Wiltern, and more. The tour will also feature headlining festival appearances at 98 Rockfest in Tampa and Earthday Birthday in Orlando.

SHINEDOWN is continuing to tour in support of its latest album, "Attention Attention", which came out last year. The follow-up to 2015's "Threat To Survival" marked SHINEDOWN's first full-length effort to be produced entirely by bassist Eric Bass. The 14-song release tells the story of a character who starts out defeated and slowly overcomes pain and personal struggles and becomes confident at the end.

SHINEDOWN's "Get Up" single went to No. 1 on the mainstream rock chart in December and crossed over to the alternative and adult contemporary charts.

SHINEDOWN has had 14 top singles in its 18-year run. That's second most in the mainstream rock chart's history, breaking a tie with VAN HALEN. 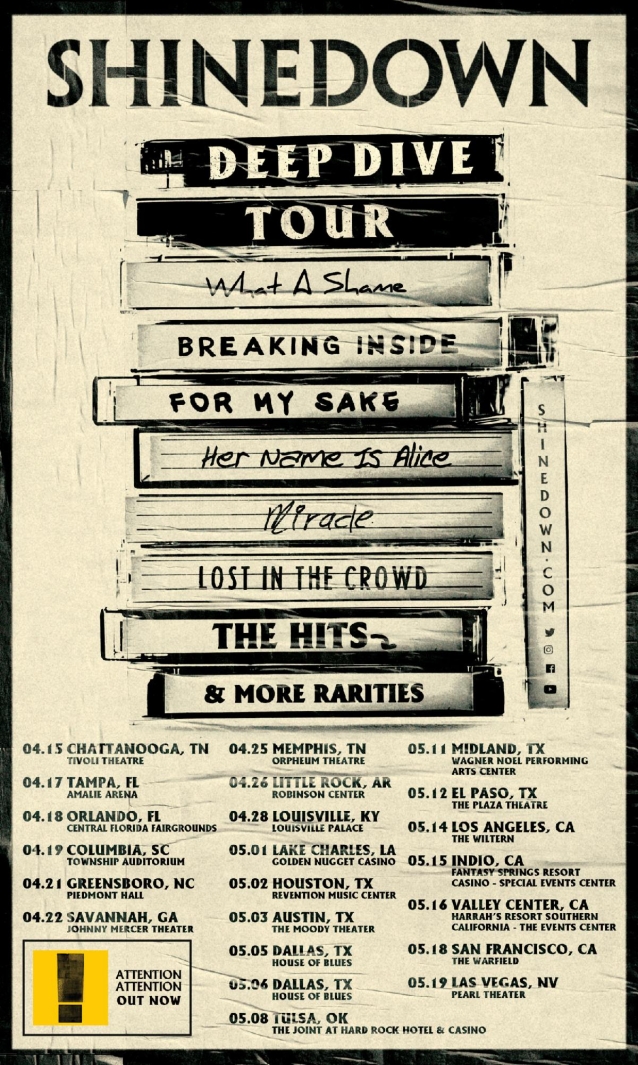