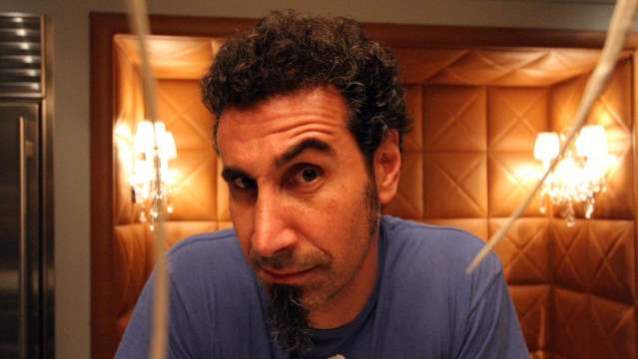 SYSTEM OF A DOWN singer Serj Tankian has commented on President Barack Obama's plan to punish Syria for an alleged chemical weapons attack.

The U.S. leader announced that he would seek approval from Congress for action against
Bashar Assad's government in response to the alleged use of chemical weapons that killed nearly 1,500 people in a Damascus suburb last week.

Writing on his Facebook page on August 29, Serj said: "I'm really concerned about the 'evidence' against the Syrian regime's use of chemical weapons as an excuse for intervention.

"Why would Assad use chemical weapons when he has the lead and in his own neighborhood? Doesn't make any sense to me.

"Would it be a far notion to assume that Al Qaeda or Al Nusra Front would do this to get the West involved?

"This time let the people of the world see the evidence and let the UN General Assembly make the decision of involvement, not a few nations of the Security Council.

Two days later, Serj followed up his original post with this message: "I really want to thank everyone who has commented on the previous post about the Syrian situation. I've read a lot of your comments and have found them illuminating.

"Ultimately, along with the use of chemical weapons and their horrific severity, the civil war in Syria has cost 100,000 lives with millions more displaced.

"If we really want to help, instead of conducting limited air strikes, which will not change the balance of power in Syria, we should propose an international, multilateral, UN peace-keeping force to end the civil war there and create an immediate cease fire that can lead to negotiations between the gov't and the rebels. I think the Russians and Chinese will oblige and join the effort, especially given the alternative of air strikes.

"Once the civil war has ended, it will be easier to deduce the guilty parties on both sides who have broken international laws and conventions and bring them to justice, preferably through the ICC or World Court to help strengthen those institutions to deal with crimes against humanity instead of weakening them, as the U.S. has in the past."