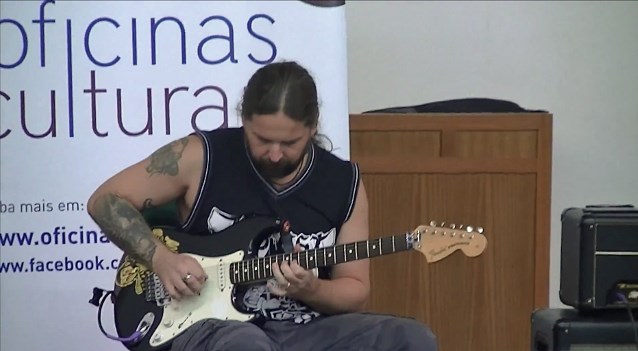 SEPULTURA guitarist Andreas Kisser took part in a workshop on February 26 at Oficinas Culturais do Estado de SP in Brazil. Video footage of his appearance can be seen below.

Kisser's solo debut, "Hubris I & II", was nominated in the "Best Brazilian Rock Album" category at the 2010 Latin Grammys.

"Metal Veins - Alive At Rock In Rio" is available on CD, DVD and for the first time in the band's history, Blu-ray via a partnership with Rock In Rio, MZA Music and Eagle Rock Entertainment. In addition, the DVD includes an exclusive documentary of behind-the-scenes preparation with interviews, rehearsal and soundcheck footage and clips of the band just seconds before they hit the stage.

SEPULTURA's latest album, "The Mediator Between Head And Hands Must Be The Heart", sold around 1,800 copies in the United States in its first week of release. The CD came out on October 29, 2013 via Nuclear Blast Records.