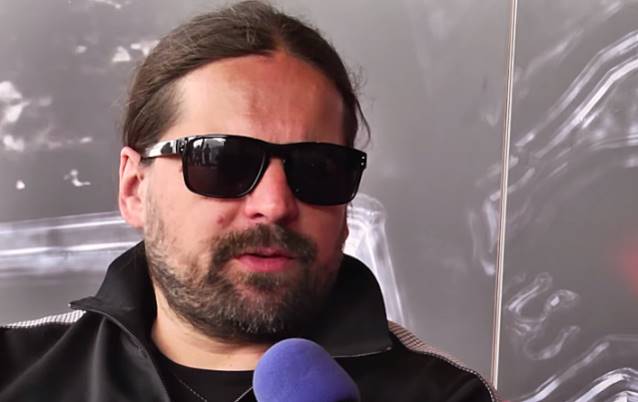 Guitarist Andreas Kisser of Brazilian/American metallers SEPULTURA was interviewed at this year's edition of the Graspop Metal Meeting, which was held June 27-29 in Dessel, Belgium. You can now watch the chat below.

SEPULTURA's new album, "The Mediator Between Head And Hands Must Be The Heart", sold around 1,800 copies in the United States in its first week of release. The CD came out on October 29, 2013 via Nuclear Blast Records.

Although it was inspired by Fritz Lang's classic 1927 movie "Metropolis", "The Mediator Between Head And Hands Must Be The Heart" is not a concept album or a soundtrack like its precedessors "Dante XXI" (based on "The Divine Comedy") and "A-Lex" (based on "A Clockwork Orange").

"The Mediator Between The Head And Hands Must Be The Heart" was tracked over a 40-day period at producer Ross Robinson's (KORN, LIMP BIZKIT, SLIPKNOT) studio in Venice, California and was mixed and mastered by co-producer Steve Evetts, who previously worked with SEPULTURA on the "Nation" (2001), "Revolusongs" (2002) and "Roorback" (2003) albums, in addition to having collaborated with Ross on a number of other projects in the past.

Asked in a 2013 interview if he was concerned about the length of the new album title, SEPULTURA guitarist Andreas Kisser said: "Not at all. For one thing, the length of the phrase that became the title made it more exciting, actually. It's something different. The title expresses the importance of being human, not to lose our heart, not to turn completely into robots. And the title expresses this kind of difference in the human side."

He continued: "People are so accustomed to certain things that when something new happens, everybody thinks that it's weird or it's wrong. That's a type of robotic feeling as well. Anything away from the normal, from the routine is considered as a wrong thing. But it's not. Art in general is here to break the rules, you know. And for SEPULTURA, it's been our motto since we started. We really tried to look for something different all the time, new music, new instruments, and we've had the privilege to travel the world and to know new people. We keep our mind fresh and that's why every time we have these ideas.

"So I would say there was never a doubt or an attempt to find a shorter name just because the phrase was too long. I think the phrase really expresses basically what we feel today and what we see today."

Kisser also spoke about the musical direction of "The Mediator Between Head And Hands Must Be The Heart" and how it compares to 2011's "Kairos". "Well, every past SEPULTURA album is definitely an influence on every new album we start working on," he said> "Of course 'Kairos' was the closest one from this, and it was really well received and everything. We did two years of touring in support of it and played great places and great festivals. It was our first album on Nuclear Blast too. So yes, there's definitely a reference to 'Kairos' on this new album in every aspect, but musically, we always try something different because we don't try to reproduce a past album again, you know. But on this one we have influences from the old stuff, more of the death metal type of thing, and I think it's dirtier and more raw than 'Kairos'. I think the main difference is the drummer Eloy Casagrande. This was the first time we worked with him, he's 22 years old, has a lot of energy and he has done a lot more metal than our previous drummer Jean Dolabella. I mean, don't get me wrong, Jean is a great musician and drummer. We did 'Kairos' with him and as we were just saying, 'Kairos' was really well received. But the new drummer is more into the metal world with his background. He's a big SEPULTURA fan and loves playing the style of music. He made a big difference to the sound and inspired us to write what we did."