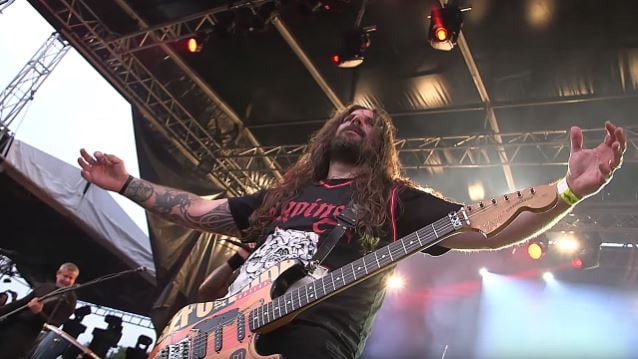 Rock N Reel Reviews conducted an interview with guitarist Andreas Kisser of Brazilian/American metallers SEPULTURA on November 18 in Glasgow, United Kingdom. You can now watch the chat below.

Asked if SEPULTURA has begun composing material for the follow-up to 2013's "The Mediator Between Head And Hands Must Be The Heart" album, Andreas said: "We started thinking about [the next album]. Of course, we have musical ideas flowing all the time. Especially nowadays [with the modern technology], it's so easy to record any idea [wherever you are]. And hopefully, if everything goes right, by the end of next year, we're gonna have something new. Let's see what happens."

According to Kisser, SEPULTURA has not yet written any complete songs for its next CD. "We're just working on early stages of demoing — just riffs and Eloy [Casagrande, drums] has some drum loops that we might [use to] start [building] something [from]," he explained. "Me and Derrick [Green, vocals] are talking about some topics — maybe songtitles and lyrics and stuff — so we start really building something. But it's still very early — [there's] not really too much to talk about."

SEPULTURA released a limited-edition seven-inch single to mark its 30th anniversary. "Under My Skin" features artwork of fan tattoos on its cover, with a live version of "Kairos" on the b-side. The single was issued on black, yellow and green vinyl, with only 200 copies of each version pressed.

SEPULTURA recently recorded a new song called "DarkSide" for the Brazilian publisher DarkSide Books. The track was "inspired by the darker side of literature."

This is not the first time a member of SEPULTURA has collaborated with DarkSide Books. Back in 2013, Kisser wrote the foreword to the BLACK SABBATH biography "Destruição Desencadeada".

"The Mediator Between Head And Hands Must Be The Heart" came out on October 29, 2013 via Nuclear Blast.