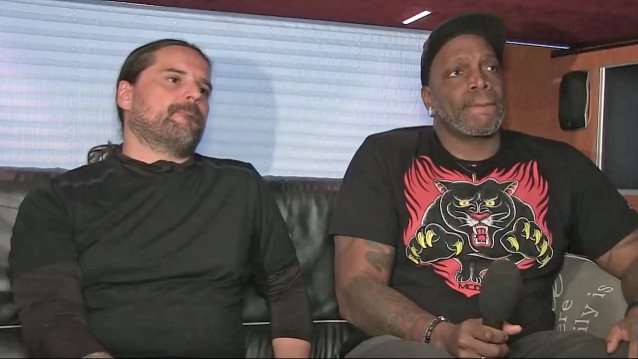 Andreas Kisser says that he doesn't care what Max Cavalera says about SEPULTURA, explaining that his former bandmate is entitled to his opinion.

Asked to comment on Max's statement, the SEPULTURA guitarist told Adam Drygalski before the band's February 15 concert in Warsaw, Poland (see video below): "I just don't care, man. It's his opinion. Who cares? I mean, so what if he thinks that? Many people think the same. So what?"

Kisser also defended SEPULTURA's decision to keep going for more than thirty years, despite the fact the band's current lineup doesn't include either of the Cavalera brothers (Max and drummer Igor Cavalera) who co-founded the group.

"I'm very proud of what we achieved with SEPULTURA," he said. "That's why we celebrated thirty years of the band and not only twenty or fifteen years or something. We take SEPULTURA as a whole career. On our set, we play songs from every album, regardless of the formation or the label that we were [on]."

He continued: "We lost members during different times. I joined the band in '87, Derrick [Green, current SEPULTURA vocalist] is twenty years in the band. Why would it be a curse? It's something very fantastic that we achieved together.

"I think members have different choices — they left the band to do something different — and we kept going on, especially me and Paulo [Xisto Pinto Jr., bass], and Igor, after Max left the band, for ten years. Igor left in 2006, and we got Jean Dolabella [former SEPULTURA drummer], and now we have Eloy Casagrande for five years already. It's a process of growing up as people, as persons, as musicians, as professionals in the music business.

"We are, I think, in our best times now. I think it's the best formation. We have a great label, we have great managers working with us, we have amazing fans that kept the band together. And we're very happy, believe it or not. [Laughs] We enjoy our life, we enjoy our band, and it's a privilege to be a part of a band like SEPULTURA. We play seventy-six countries in thirty-three years, and regardless of the formation, here are are doing stuff, [with] a great new album that has been [met with a] very positive reaction. We have a movie talking about the SEPULTURA history coming out this year as well. We have many products in Brazil, like beer, wine, hot sauce and all types of different products with the brand SEPULTURA name. You know, I cannot complain. All the difficult times and the difficult tasks that we achieved or we had in our lives were great learning experiences. We are better people and better musicians because of that. Without all the trouble, all the problems we had, we wouldn't be here today. So we embrace everything that happened with SEPULTURA, good and bad. The same with fans — we love how diverse the SEPULTURA fans are. They don't think the same, they don't have the same opinion. We love the haters. They are a great part of our history, and we are all a part of a great family, like it or not."

Kisser added: "In the end, the word that describes SEPULTURA is 'respect' for everything that happened to this band and still is happening to the band. The past is a great thing for us. It really inspired us to do what we do today all the time."

In 1996, Max left SEPULTURA after the rest of the band fired his wife Gloria as their manager.