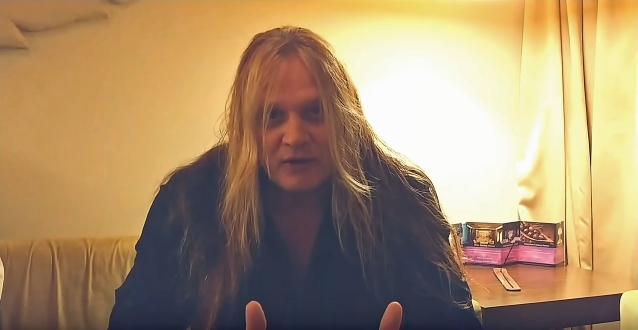 Former SKID ROW singer Sebastian Bach has implored his fans to vote in the mid-term elections, saying that our "planet is in peril" due to climate change.

The midterm elections are today — Tuesday, November 6. All 435 seats in the House of Representatives will be voted on during the midterms, because members run every two years. Thirty-five seats in the 100-member Senate (members serve six-year terms) are on the ballot this year as well. So are the governorships in 36 states.

A victory for the Democrats over the incumbent Republican majority could make life harder for President Donald Trump, who may find it more difficult to pass bills through Congress.

On Monday (November 5), Bach uploaded a two-minute video to his social media in which he urged everyone to vote for officials who will help protect and preserve the environment, push for changes on gun control and denounce racism.

The singer said: "Hey, how's it going? Greetings from the Dominican Republic. We are excited to play a show tomorrow with Bret Michaels, right on the ocean. But one thing is really sticking in my brain, and I have to say something about it. And that is, of course, tomorrow is election day in America. Tuesday is the big day — November 6th. I voted by mail a couple of weeks ago."

"If anyone watching this on my Twitter feed or whatever doesn't think it's important, I'm reading articles saying that this is the last generation that can save nature. The planet is in peril; every year gets hotter.

"And the last thing I just wanna say is think about kids — think about your kids; think about all the kids around the world. We're not gonna be here 40 years from now — none of us, if we're adults — but kids will have the world that we leave to them, and it's our responsibility as adults to leave them the best world that we can."

The former SKID ROW frontman has been extremely vocal in his distaste for the current U.S. president, saying in a 2017 interview that things had gotten particularly bleak after Trump took office. "Since Donald Trump became president, Facebook became not fun for me," he told Australia's Music Injection. "Every headline sucks, everything sucks and I get to the point where I can't take it! All of that news, constantly, day after day, week after week, it gets me down and it gets me in a bad mood.

"I don't know about everybody else, but when I read about nuclear war, I find it hard to get on with my day," he added. "I thought we got rid of that nuclear war conversation in the '70s! It gets [me] very sad and angry at the same time. Climate change makes me angry. It makes me mad that people deny that when the world is fucked. It makes me furious."

Sebastian recently confirmed that he was preparing to make the follow-up to his 2014 album "Give 'Em Hell".