Scott Ian is selling handwritten lyrics from both ANTHRAX and STORMTROOPERS OF DEATH via his official web site.

Says Ian: "Choose any ANTHRAX or S.O.D. song and I will personalize or dedicate them to anyone you want. The lyrics will come with a signed certificate of authenticity and a stage-played guitar pick."

In a 2016 interview with Full Metal Jackie, Ian said that he loved writing lyrics. "Don't get me wrong — it's still such a challenge for me," he said. "I just find the mechanics of it so odd and challenging, and I think that's something that I love so much about it.

Elaborating on his lyric-writing process, Ian said: "I'm always thinking. I'm always making notes. It's one of the good things about technology. With my iPhone, I can always just — any idea I have, I just write it in my phone. Then when it comes time to actually start writing lyrics, that usually, for me, doesn't come until we've got pretty solid song arrangement and I can sit and listen to the instrumental versions of the songs and that really is what gets my brain into gear as far as what a song is going to be about. The feeling of the riffs, whether if I feel a riff is angry or the riffs will tell me, 'Okay, this is going to be this kind of song.' 'I need lyrics like this. 'Or sometimes I'll just start singing words to a part that are complete nonsense and then from those nonsense words start figuring out what I'm going to write about."

He continued: "I know it sounds weird and spacey, but it really is the music that tells me. A song knows what it's going to be about and it lets me in on the secret, and then I'm, like, 'Oh, that's who you are.' Then I'll go through my notes and see if there's anything in there that makes that song happy. Like, 'All right, these lyrics fit with these riffs really well. They should get married.' I literally think about all that kind of crap when I'm writing. But really, it's just a case of coming up with ideas that I feel passionate about. Most of the time it's stuff that makes me angry about the world. Hate and love, both very strong emotions. I just tend to write more hateful songs about things on the planet than I do love songs."

ANTHRAX is continuing to tour in support of its latest album, "For All Kings", which was released in February 2016. 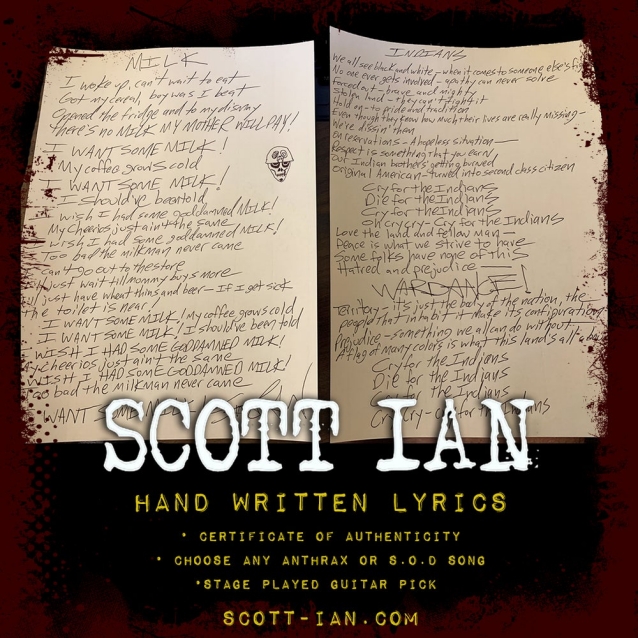