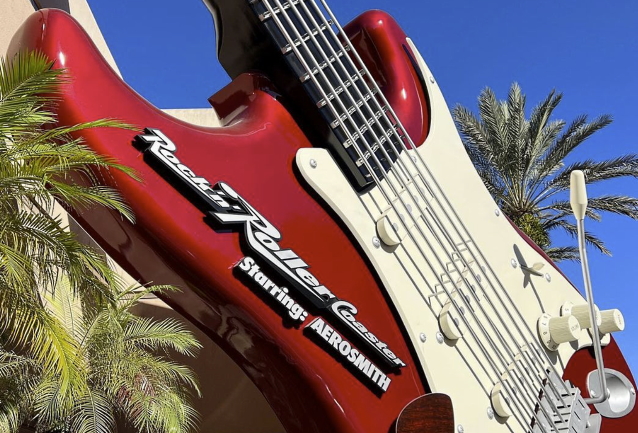 Walt Disney Imagineering showed off the finished product on Instagram, writing in an accompanying message: "Recently, the Rock 'n' Roller Coaster starring Aerosmith covers were dropped revealing the dazzling refurbishment of everyone's favorite oversized guitar at Disney's Hollywood Studios at @WaltDisneyWorld Resort. After weeks of preparation, body work and some fresh paint, the iconic guitar has been restored to look better than ever and keep our fans rocking on. Thanks to our rock stars from the Florida Design & Show Quality team!"

A 12-year-old boy died in June 2006 after riding Rock 'N' Roller Coaster Starring Aerosmith at Walt Disney World near Orlando. It was subsequently determined that had a congenital heart defect, and an inspection of the ride found no mechanical problems.

The Rock 'N' Roller Coaster is an enclosed, 82-second ride with a roll-over corkscrew feature accompanied by a blasting AEROSMITH soundtrack. It is presented as a high-speed journey down a mythical Los Angeles freeway.

According to its premise, AEROSMITH, late to a concert across town after a recording session, invites riders along with them in a fast-paced journey across Los Angeles. The journey, however, notably takes place entirely in the dark, with only neon signs lighting the way.

Disney's web site says coaster riders will "zoom from 0-60 mph with the force of a supersonic F-14, take in high-speed loops and turns synchronized ... and zip through Tinseltown in the biggest, loudest limo you've ever seen."