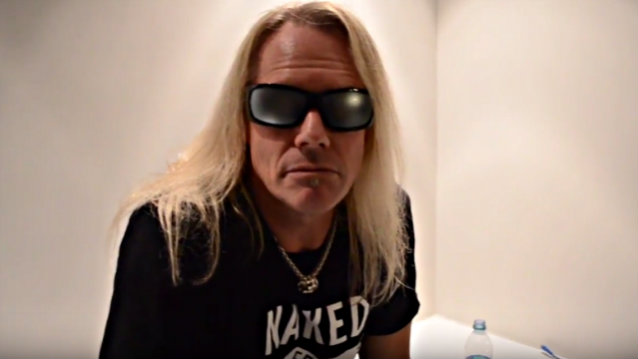 WARRANT singer Robert Mason says that the band never considered changing its name after the final split with its frontman and main songwriter Jani Lane.

Asked by Rock N Roll Experience at this past weekend's M3 Rock Festival at Merriweather Post Pavilion in Columbia, Maryland if the members of WARRANT ever thought about calling the band something else after Lane's exit almost a decade ago, Mason said (see video below): "There's a legacy of songs that we still play, and people remember it that way. I don't know why I would ever wanna change the name of the band."

After Rock N Roll Experience told Mason that fans of 1980s hard rock bands like WARRANT don't seem to be interested in hearing new music from those artists, the singer said: "I have to absolutely diametrically oppose and differ with your opinion. We were in Portland, Maine last night, the place that was just opening. [It was] us and DOKKEN [on the bill], and we played a song called 'Louder Harder Faster'; it's the title track of our new record. I told the audience about it, I told them they needed to scream the chorus, I gave them an example, they did it back twice. During the song, they sang their asses off, and they screamed like bloody murder when we were done. A brand new song they've never heard before. Who says you can't teach people to embrace new music? Not me. I'm thankful for it."

Asked if he ever feels "the spirit of Jani Lane" out there when he is singing Jani's songs, Robert said: "He and I were friends. Of course, there's a legacy of songs that I do my absolutely damndest to faithfully pay tribute to my friend and what fans remember. That's why the name of the band ain't gonna change, playing those songs ain't gonna change. I embrace the fact, and I was a fan first anyway, and a friend. So the fact that I get to do this — coolest job in the world for me."

When pressed about whether he thinks Jani would have given him his blessing to take over as the singer of WARRANT after Lane's final departure from the band, Mason said: "He did. I was in the band for three and a half years before he passed. Like I said, he and I were friends. He was probably not as comfortable with it because of his own personal reasons, but the guy couldn't keep himself heathy, and nobody in the band wanted to have him die on the road. It was five cylinders and only four cylinders working. That's the God's honest truth, and, believe me, it pains me to say so. Because when they got together in 2007 with all original guys, I sent Lane texts and left him messages and all that, wishing him well, and knew that he was still in and out of rehab. I never heard back from him. And our paths crossed a few times. He made his peace with it."

Mason added: "[Jani was] a great songwriter, a great frontman. We were really good friends. Our friendship was the reason why LYNCH MOB supported WARRANT in arenas back then."

WARRANT's new studio album, "Louder Harder Faster", will be released on May 12 via Frontiers Music Srl. The disc was recorded with producer Jeff Pilson, a veteran bassist who has played with DIO, FOREIGNER, DOKKEN and T&N, among others, and was mixed by Pat Regan except for the song "I Think I'll Just Stay Here And Drink", which was mixed by Chris "The Wizard" Collier (FLOTSAM AND JETSAM, PRONG, LAST IN LINE).