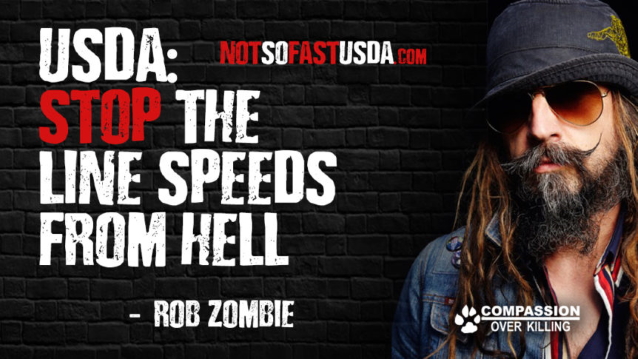 This Halloween, musician and horror filmmaker Rob Zombie is taking the US Dept. of Agriculture (USDA) to task over its high-speed slaughter program posing real-life dangers to billions of animals, workers, and consumers.

On the heels of his new movie "3 From Hell", Rob Zombie appears in a new ad for Compassion Over Killing (COK), saying, "USDA: Stop the line speeds from hell!" His image is now appearing in geo-targeted mobile ads reaching thousands of people around USDA headquarters in Washington, D.C.

Just last month, the agency finalized a rule that will allow pig slaughter plants nationwide to run kill lines as fast as they want, despite receiving opposition from more than a quarter million people who signed COK's petition, authored by former investigator Scott David.

David's investigation of a high-speed Hormel plant killing approximately 1,300 pigs each hour — or one pig every five seconds — allegedly revealed workers beating, shocking, and dragging animals as they struggle to keep up with line speeds, and pigs covered in feces and pus-filled abscess processed for human consumption with a USDA inspection seal of approval.

High-speed lines also endanger slaughter plant workers, already working in what research shows is among the nation’s most dangerous industries — with frequent severe injuries and even amputations.

"While the USDA frames high-speed slaughter as 'modernization' of the meat industry, you'd have to be a zombie to miss that it's a horrifying step backwards endangering animals, workers, and consumers," said Laura Cascada, senior director of campaigns & outreach, Compassion Over Killing.

Compassion Over Killing (COK) is a nonprofit animal protection organization working to end the abuse of farmed animals through undercover investigations, litigation, corporate outreach, public education, and other advocacy programs.