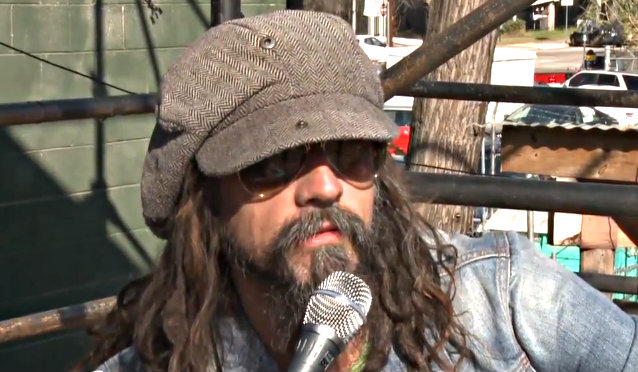 Rob Zombie recently spoke to HEAR magazine about his latest album, "Venomous Rat Regeneration Vendor"; his upcoming film based on the Broad Street Bullies (the Philadelphia Flyers); and the enjoyment of putting together the first Rob Zombie's Great American Nightmare. You can now listen to the chat using the audio player below.

Zombie recently told Artisan News about the progress of the "Broad Street Bullies" project: "As of right now, the script is done, 'cause that was a long process, putting a script together. And we're just sort of putting the financing together, putting the structure of the film together, all the boring stuff, and also beginning the early process of casting, trying to figure out who's gonna play who and what's gonna happen."

Zombie told The Pulse Of Radio how, after making five previous live-action horror films, he came to direct a sports movie. "Someone came to me who had the rights to the story — he had gotten the rights from the Flyers — and he was a fan of my films," he said. "He didn't even know I liked hockey or had any affinity for it. He just took a chance, and when the story came up, I was like, I remembered that time period so perfectly, I was a huge hockey fan in the '70s, you know, so it was just a perfect match."

Zombie hinted that casting the movie might be difficult because "a lot of actors can't skate that good." He added: "Nobody's gonna be able to learn to play to the level we're gonna need them to play at, to make the scenes believable . . . Those guys are such superior athletes that I think we're gonna need to find actors who are already good skaters or players who are good actors."

Zombie plans to shoot most of the movie in Philadelphia.

Zombie's most recent film, "The Lords Of Salem", was released on Blu-ray and DVD on September 3.

On the music front, Zombie's fifth solo effort, "Venomous Rat Regeneration Vendor", was released in April and entered the Billboard album chart at No. 7 with first-week sales of 34,000 copies.