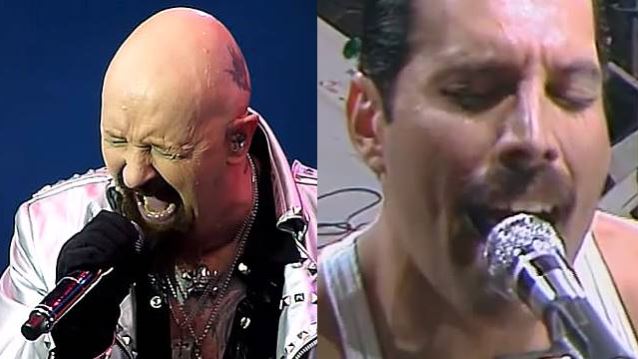 JUDAS PRIEST singer Rob Halford and QUEEN frontman Freddie Mercury are among the men the Russian edition of Maxim magazine has "forgiven" for being homosexual.

In the article headlined "Gays We Respect," Maxim Russia reveals the actors, authors and musicians that have won their admiration despite their objections to their sexual orientation.

"We, men, do not consider men who love men to be men. This is the rule," reads the English translation of the article published Thursday on MaximOnline.ru. "But there are exceptions. There are gays who have earned our respect and the right to remain real men in our eyes."

Halford was held up as evidence that "if you're cool enough, it doesn't matter what your orientation is," while Mercury is an "exception to all rules," Maxim Russia wrote. "His creativity brought us so much joy, that we are willing to forgive him anything."

Other celebrities who made the list include Ian McKellen, Stephen Fry and Neil Patrick Harris.

Alexander Malenkov, the editor in chief of the Russian edition of Maxim, told the Russian News Service: "This is a joke article. It says so in it." However, there is nothing in the text to indicate that the article is meant to be a parody.

The magazine's editor told Buzzfeed: "Our position is clearly formulated in the introduction of the article."

But a spokesperson for U.S. Maxim slammed the article, saying: "We are deeply disturbed by the article in Maxim Russia and fully condemn it. It is entirely against the views of U.S. Maxim."

Gay people in Russia are under pressure over their sexual orientation, more than 20 years after the country decriminalized homosexuality.

It is estimated that just 1% of the country's LGBT population lives openly due to the discrimination and sometimes violence gay people face.