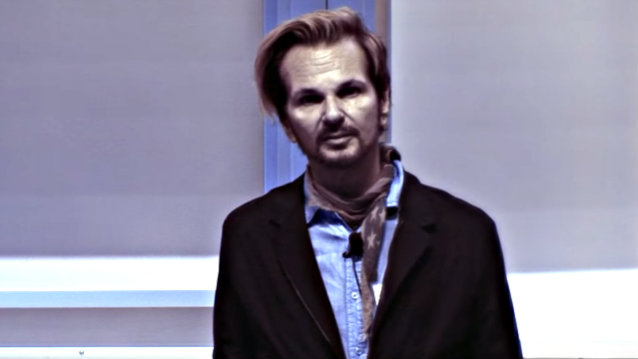 Rikki Rockett says that there has been "talk" about POISON writing and recording "at least one" new song.

During an appearance on the "Trunk Nation" show on SiriusXM channel Volume (106), Rockett was asked if there is a chance that POISON could return to the studio to make new music after completing its North American tour with DEF LEPPARD.

"There has been talk about doing at least one song, 'cause I know that could happen," Rikki revealed.

"We find ourselves in a position right now where we're in a singles market," he continued. "It's like back to the '50s again, and that's not where we came from. I mean, we had a lot of singles and we had Top 10 hits and we had MTV video hits, so you could say that we came in that way, but it was our relentless touring and the fact that we did do cohesive records that really created our fanbase, I think, in the long run. I think those singles is what put us in the spotlight to be able to capture that audience. So for us to all of a sudden become a quote-unquote singles band, like some of these bands…"

Rikki added: "I don't know if everybody listens to the rest of the TWENTY ONE PILOTS record except for their single — I don't know that answer — but if you look at sales, it looks like people are just downloading the singles to things these days. So in some ways, it makes sense to just start with doing a single, which would be the proving ground."

Rockett went on to express his uncertainty over how a POISON standalone single would fare in today's market, explaining that "we've always walked in and done a whole record." But, he added, "maybe we [could] do three songs.

According to Rikki, one of the reasons he would prefer to make a full-length POISON record is the fact that "the album does take you on a journey, and that's the kind of band we're made of. However," he acknowledged, "it's hard to get the industry to support that. And does that mean that we couldn't do it? That's almost a challenge in itself: could we put out one song that moves the needle? 'Cause invariably it's one song that moves the needle on a record or the rest of the record gets overlooked anyway, unfortunately. It's always been that way, quite frankly. I mean, there's exceptions, of course — the RUSHes of the world, and things like that — but, generally speaking, that's how it is."'

Rockett, frontman Bret Michaels, guitarist C.C. DeVille and bassist Bobby Dall recently kicked off POISON's first U.S. road trip since 2012. The singer's focus on his solo career had made it look doubtful that the original quartet would ever tour together again, and it's not presently clear if POISON will return to hibernation once the DEF LEPPARD trek ends on June 25 in Indianapolis, Indiana.

Rockett admitted to feeling frustrated with Michaels's decision to spend so much time nurturing his solo career, telling "Trunk Nation": "There's no secrets. I mean, I've told Bret exactly how I feel about this stuff. I don't care if anybody in this band does side things. I think it's healthy; honestly, I do. To just play the same songs and work with just the same people over and over and over again can become stale, and you do have to do some things. However, I think that Bret has taken it a little too far times and he needs to come back to the fray a little bit, and I think we should make more POISON music, make a record. He knows I feel that way; there's no secret there. I'm not talking behind his back and I'm not talking shit."

Back in 2015, Rockett, Dall and DeVille, plus vocalist/rhythm guitarist Brandon Gibbs (CHEAP THRILL, DEVIL CITY ANGELS), played several shows as THE SPECIAL GUESTS in what was widely perceived as a not-so-subtle message to Michaels that they weren't willing to remain completely inactive while he pursued a solo career. Asked if that was indeed the motivation behind doing those dates, Rikki said: "Well, a little bit, but it was more like we got asked to do those [as POISON], and we got kind of excited to do it. And then [Bret] had some other things pending that he chose to do instead, and we just kind of were, like, 'Hey…' We talked to the promoter and said, 'What if we did this and we used Brandon?' Because Brandon and I were getting a lot of traction with DEVIL CITY at the time, so it kind of made sense. Why not do these gigs? If Bobby and C.C. were ready to do it, why should we just sit home because Bret's gonna do something else. Yeah, a little bit it was kind of, like, 'See, we can do this too.' But it wasn't to break up the band over it — it wasn't intended to do that. It was just more or less, 'Hey, we're not gonna sit on the sidelines.' And I think it was really cool, quite frankly. We got a lot of really positive response from that; it was really a fun gig. I'm used to working with Brandon. It was a little different for Bobby and C.C. But Brandon and I do quite a number of shows together, whether it's DEVIL CITY or it's acoustic or whatever."

Rikki also said that he would be open to doing more shows with THE SPECIAL GUESTS if Michaels chose to once again focus exclusively on his solo career after the DEF LEPPARD tour. "Well, maybe," he said. "Honestly, we haven't talked about it — really, we haven't. But I do think that we do need to have that conversation, to find out what we are doing going forward, because I think people don't want POISON to be gone, and I don't. I don't think any of us do, really. I think that it's a painful process, this band… At least it's perceived that we're gonna go through this painful process with anything we do, and then here we go into rehearsals and on a tour, and it's not painful and it's fine and it's fun. So maybe everybody will see that that is really a viable option, to go forward and do more POISON stuff. If Bret wouldn't wanna do it, then I would wanna have that conversation — I really would."

Rockett was recently declared cancer free after undergoing an experimental treatment. He was diagnosed with oral cancer back in 2015.