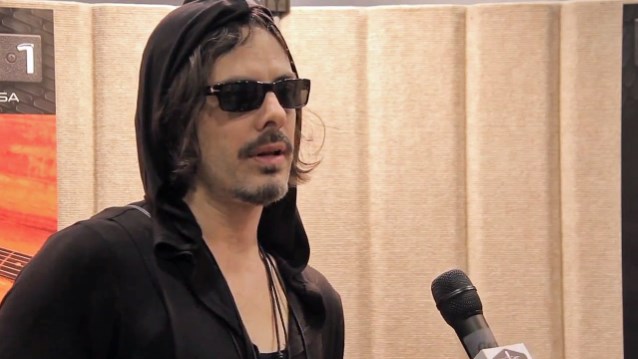 MusicStoreLive.com conducted an interview with Richie Kotzen (THE WINERY DOGS) at this year's NAMM show, which was held January 22-25 at the Anaheim Convention Center in Anaheim, California. You can now watch the chat below.

Asked about the status of THE WINERY DOGS, Kotzen responded: "We are working on new songs. I just released a solo record, two weeks ago, called 'Cannibals', so that's out now. And then, I would think that, in a perfect world, we will start recording the next WINERY DOGS record in May, and hopefully have that out by the end of summer and get back out on the road. That's the goal."

Kotzen also spoke about the upcoming second installment of THE WINERY DOGS' "Dog Camp", an immersive program for aspiring musicians of all ages and levels, which is set for this coming July at Full Moon Resort in Big Indian, New York.

"Yeah, we have this thing we did last year called 'Dog Camp', which people can sign up and hang out with us up in the woods of New York, so it's pretty fun," he said. "And we're doing it again this summer, so I'm looking forward to that as well."

Kotzen was asked by GetYourRockOut last year whether he felt any pressure trying to follow up the success of THE WINERY DOGS' self-titled debut album as the group prepared to begin work on its sophomore CD. "Personally, no," Richie said. "With music, I'm one of those people that, like… I don't think about anything other that doing what feels right to me. I mean, I probably could have put myself in situations where a lot more people would know about me, but I don't, because I don't wanna play music that I don't wanna play. I learned that in the past. And so either, personally, I'll play music that I wanna play, that I believe in, or I won't play music at all. And I've done that; that's me. And I think the other guys [in THE WINERY DOGS], I won't speak for them, but making a record with them, and knowing them as well as I do now, I don't think THE WINERY DOGS would make a record that the three of us would put out that we all didn't love."

He continued: "Once you start looking at music like a math equation and you start making choices that are outside the realm of creativity, you put yourself in a situation for a lot of emotional failure. And when you are there, then the music is meaningless and everything suffers and then things fall apart. So, I think, whatever we do, we'll do what feels natural and what the three of us can get behind. Even in the decision-making process, if I make a suggestion and one of the other guys loves it, but the other guy doesn't, we don't do it. We don't move unless all three of us agree to move. And then that way, once you're in a position, at least you know all three of us decided to go here; it's not like we were drug here by… you know what I'm trying to say?! By someone that didn't wanna go there."

Asked if THE WINERY DOGS will make a conscious effort to create a second album that will be stylistically similar to the debut, Richie said: "I don't think in those terms. We're gonna write what we we're gonna write. We're gonna get in a room and we're gonna do what we did last time. Mike's gonna play a drum beat, I'm gonna sing a chorus idea and Billy's gonna play a bass thing, and we're gonna jam on it and manipulate it and write to it. And it's gonna be what it's gonna be, because, like I said, music isn't math to me; music is something that you feel, that comes from creativity."