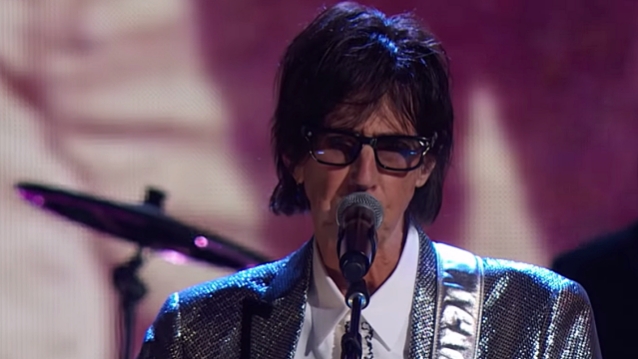 It's unclear how long Ocasek had been suffering from heart disease.

Ric was found dead in his Manhattan apartment yesterday (September 15) by his third wife, supermodel Paulina Porizkova, whom he married after the two met while shooting the video for 1984's "Drive". The couple last year announced their separation.

Ocasek had recently undergone an undisclosed surgery. Paulina described his death as "unexpected and untimely," saying that she found him still asleep when bringing him his Sunday coffee.

Ocasek is survived by six sons, two from each of his three marriages.

Ocasek, who was born Richard Theodore Otcasek in Cleveland, and THE CARS had 13 Top 40 singles, including "Just What I Needed", "Best Friend's Girl", "Let's Go", "Shake It Up", "You Might Think" and the ballad "Drive". The band split in 1988 and reunited in 2011 for its first album in 24 years, titled "Move Like This". They were inducted into the Rock And Roll Hall Of Fame in 2018.

Image courtesy of Rock And Roll Hall Of Fame