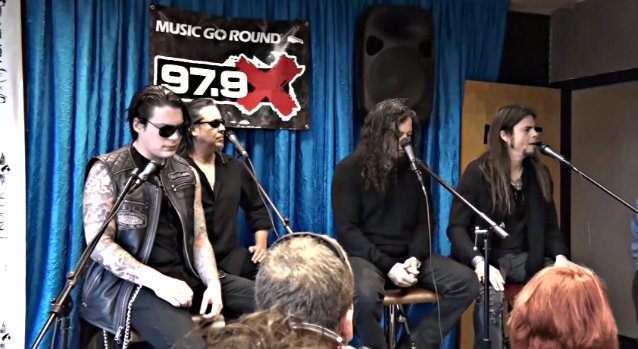 Progressive metallers QUEENSRŸCHE recently took part in a question-and-answer session with listeners of the Pennsylvania radio station 97.9 X. You can now watch the discussion below.

Asked how QUEENSRŸCHE approaches the recording process today compared to a time when recording budgets were in the high six figures, guitarist Michael Wilton responded: "Very carefully. This is the modern age. We all have computers with Pro Tools systems on, so you get a lot of the initial work kind of 'pre-done.' These days, you can do most of the recording on your own personal studio, so that brings the budget way down. We usually rent out a big room for drums, and that's usually the biggest expense as far as the production cost. And everything else is kind of… Overdubs are subbed out into smaller places — sometimes our homes, sometimes our rehearsal halls. Generally, the budgets have shrunken, so you just have to be wise with your money, because sometimes the producer eats up a big portion of that, and then what's left is kind of what the start-up is for your tour. It's really a mathematical game, to try and just figure out what you actually get to keep out of that recording budget."

Singer Todd La Torre, who says that QUEENSRŸCHE has been his favorite band since he was 15 years old, joined the group several months after meeting QUEENSRŸCHE guitarist Michael Wilton at the 2012 edition of the NAMM convention in Anaheim, California.

QUEENSRŸCHE is currently working on material for a new studio album for a tentative early 2015 release.

QUEENSRŸCHE's self-titled album sold around 13,500 copies in the United States in its first week of release to land at position No. 23 on The Billboard 200 chart. The record arrived in stores on June 25, 2013 via Century Media Records.