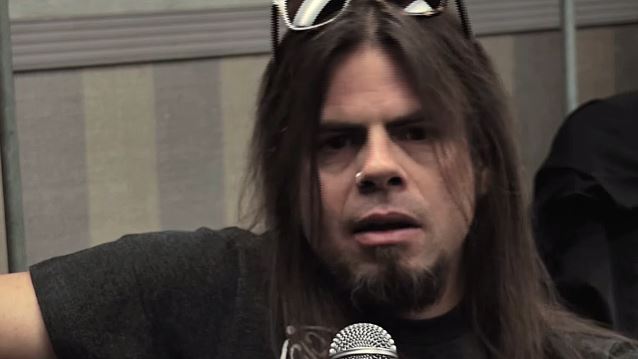 Straus Project recently conducted an interview with QUEENSRŸCHE singer Todd La Torre. You can now watch the chat in three parts below.

Speaking about the importance of artists engaging with their fans via social media due to diminishing music sales in the streaming age, Todd said: "These kinds of bands aren't selling arenas like the good old days that I love and you love, and so bands primarily rely on touring and selling merchandise. And because album sales aren't what they used to be and bands have to rely on touring, how do you get people…? I mean, if you don't hear our songs on the radio as much as either a) ever, or b) not to the degree that it used to be, how do you get people to know about you? And then there's this very personal aspect that's come into play that never did. I mean, music has always been very personal and it means a lot to different people."

He continued: "It seems there's a slight bit of entitlement, almost, by some fans. Like, 'I commented on your thing, and you didn't answer me back.' And I've had that. 'I've been commenting on all of your posts, and I don't think it's really you that checks. Why don't you answer me?' And it's, like, I'm the only one that runs my [Facebook] page. If anybody likes or says anything, it is me. But I can't get to everybody all the time. And so, there almost seems... There's like this personal, like, 'You owe me, because I liked your page.'

"So social media can be great, and it can be slightly detrimental. Because everyone now has an opinion with not much of a filter, if any. And people's feelings get hurt really easily. And it's an interesting time. But we are very active on social media, and I would say that it more positively than negatively resonates with the audience and translates as a positive thing to maybe they were on the fence, and then you answer a question they have, and that could have been the turning point for them going, 'That was awesome. I'm gonna go see them.' And that's another ticket sold. And then they say, 'I wanna buy a t-shirt.'

"People work hard for their money. We don't take that lightly. So when people come to a show, whether it's two hundred people, five hundred people or twenty thousand, or whatever it is, each person, to us, is valuable, and we do thank them for coming out, supporting live music, spending their hard-earned money on our product. But the records now are more or less a business card to get them to come see you.

"I don't make a living on publishing. Don't get me wrong: I've done well for writing songs and selling CDs, but certainly that's not sustainable to earn any kind of a great living. Those days are not what they used to be."

Todd added: "It's a fine line between being engaging with people and being too accessible. I think that there's a value in not being so accessible twenty-four hours a day, because then… You can't keep up with everyone, and so when you start doing that, then it's, like, 'Okay, why isn't he doing it now?' There's an expectation. And I think there's something nice about a little bit of a mystery still. Even me as a fan, if I knew that every time I could go on Bruce Dickinson's [IRON MAIDEN] Facebook page and asked him a question and he answered me… There's almost a thrill that there's a barrier, almost, as a fan. It's like a magic trick: you're amazed at the illusion and you wanna know the answer, but you don't wanna know the answer, because when you find it, it's so simple, you wish you hadn't seen it. And so sometimes, there are those moments where because it's very few and far between that an artist will engage, it's, like, 'Wow! Okay, that was awesome.'"

QUEENSRŸCHE's latest album, "Condition Hüman", debuted at No. 27 on The Billboard 200 chart, having shifted 14,000 equivalent album units in the week ending October 8.

"Condition Hüman" was released on October 2 via Century Media.