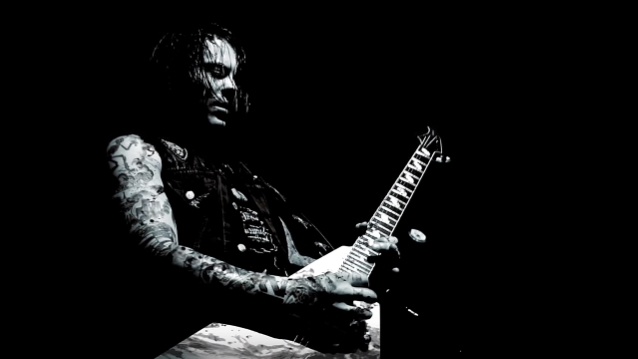 QUEENSRŸCHE's Parker Lundgren is sitting out the band's U.S. shows as the support act for SCORPIONS. The guitarist, who joined QUEENSRŸCHE in 2009, "has some personal things to take care of" and "will be returning to us all at the end of September," the group said in a statement. Filling in for Parker for the SCORPIONS dates is Mike Stone, who joined QUEENSRŸCHE for the 2003 album "Tribe" and stayed with the band for six years. He was eventually replaced by Lundgren, a former member of original QUEENSRŸCHE singer Geoff Tate's solo group who was also briefly married to Geoff's stepdaughter Miranda.

QUEENSRŸCHE's tour with the SCORPIONS kicked off on August 31 in Lake Tahoe, Nevada and will conclude on September 14 in Tampa, Florida.

Fan-filmed video footage of QUEENSRŸCHE performing the songs "The Whisper" and "Eyes Of A Stranger" last night (Sunday, September 2) at the FivePoint Amphitheatre in Irvine, California can be seen below.

QUEENSRŸCHE singer Todd La Torre revealed in a recent interview that the band's long-awaited follow-up to 2015's "Condition Hüman" album is fully recorded and is currently being mixed for an early 2019 release.

Earlier this year, QUEENSRŸCHE entered the studio with producer Chris "Zeuss" Harris to begin recording its new disc. Todd spoke about the album's musical direction with Eclectic Arts, saying: "It's got more driving songs on this record than the last one… I think there's elements that are more progressive — some different time signatures. It's a good-flowing album.

"There's some slow, kind of haunting, creepy, cool stuff on this record," he continued. "Like I say, there's more progressive elements on this one, I think — certainly more, I think, than the last one. The song 'Condition Hüman' was kind of progressive in QUEENSRŸCHE's standards, so there's kind of some of those elements going on. Really good lyrical content — thought-provoking stuff. Certainly never trying to tell anyone what to think, but to think. Again, a lot of it deals with things that are happening in the world that everyone can identify with and relate to. I tried to have some really good vocal acrobatics on this [album]. There's not a ton of high singing, but there's some high stuff on there vocally. I mean, it just sounds like a great QUEENSRŸCHE album to me. But you never know until you put it out to everyone, and then it's not yours anymore."

For the past 17 months, drummer Scott Rockenfield has been taking time off from QUEENSRŸCHE's touring activities to spend time with his young son, who was born in early 2017. Filling in for him is former KAMELOT drummer Casey Grillo. However, QUEENSRŸCHE has not yet indicated if Rockenfield was involved with the making of the disc, although it did confirm that Grillo did not play on the record.

QUEENSRŸCHE's next effort which will mark the band's third full-length release with La Torre, following the departure of Tate in 2012.