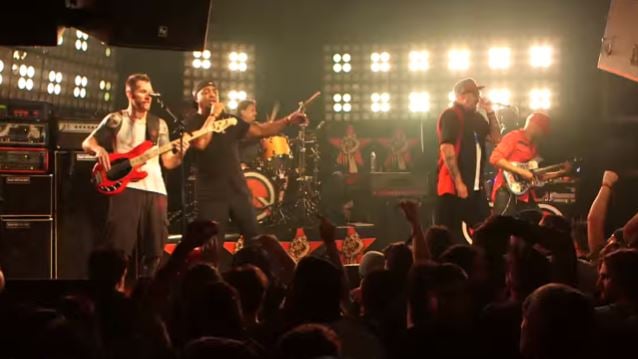 PROPHETS OF RAGE, the supergroup featuring members of RAGE AGAINST THE MACHINE, PUBLIC ENEMY's Chuck D and CYPRESS HILL's B-Real, will embark on a North American tour in August.

Tickets go on sale on June 10.

PROPHETS OF RAGE played its second-ever concert this past Friday (June 3) at the Palladium in Hollywood, California. As was the case at the band's show at the Whisky A Go Go in West Hollywood three days earlier, the outfit performed 20-plus songs from all three of their bands, including RAGE's "Testify", "Sleep Now In The Fire" and "Bulls On Parade", PUBLIC ENEMY's "Prophets Of Rage", "Welcome To The Terrordome" and "Bring The Noise", and CYPRESS HILL's "Rock Superstar" and "Insane In The Brain".

The act also played two new songs, one of which was called "The Party's Over". The track was reportedly dedicated to Republican presidential nominee Donald Trump.

PROPHETS OF RAGE will travel to Cleveland to "Make America Rage Again" during the Republican National Convention in July. Guitarist Tom Morello told Bloomberg Politics: "That will be a perfect place for a band like PROPHETS OF RAGE to cause a ruckus, and we will be there on the streets, in the field. We have a venue and there may be venues that will be spontaneous venues, it's hard to say. This is the kind of thing you don't broadcast to the local authorities prior to arrival."

RAGE AGAINST THE MACHINE staged a concert in 2008 at the Target Center in Minneapolis, just a few days before the Republican National Convention took place there. Following the performance, over 100 people were arrested during the protests sparked by the RAGE concert.

While clearly on the left side of the political spectrum, Morello has told The Pulse Of Radio before that he's not a fan of either major political party. "I've always felt more much comfortable on the outside, lobbing musical Molotov cocktails over the barbed wire fence and, you know, I believe that both political parties are severely flawed, and neither one of them really represents the true needs of the vast majority of Americans," he said.

There is no word yet on whether PROPHETS OF RAGE are working on a full album.