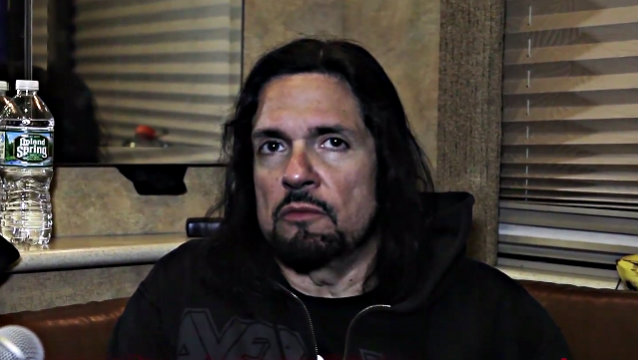 YELL! Magazine conducted an interview with vocalist/guitarist Tommy Victor of American industrial metal power trio PRONG after the band's April 26 show at Metropolis in Montreal, Quebec, Canada, in support of TESTAMENT and SEPULTURA. You can watch the full interview below. A few excerpts follow (transcribed by BLABBERMOUTH.NET).

Tommy: "It's very challenging to do that. I don't know how I've been able to do it. We just recorded a new record that's coming out July 28 called 'Zero Days'. Essentially, I got off tour in Europe and got in my room and I just had to start writing. I guess if I'm out on the road and I'm playing guitar a lot, I seem to see what not to do. I try not to copy myself, so I'm able to have a bunch of riffs that I can start out with. I got to get off my butt and do it. The lyrical part of it is a whole other challenge. I have to prepare myself for it, like I had to do a lot of reading, stay in touch with the news, do some meditation, do some walks, have a montage of friends, have some conversations, stimulate my writing mind. That's a whole separate thing. I take a lot of pride in the lyrics and what the songs are about and no one really knows what they're about, but I do. [Laughs] I'm always thinking and there's always something that comes around that's stimulating, but you have to put yourself in these situations to be stimulated."

On whether he's inspired by current events:

Tommy: "I usually don't get that heavily political in the lyrics. '[X -] No Absolutes' had little tinges of it. What I do, I take a box and I'll throw a little bit of politics with spirituality and punk rock mentality into this collage and that's what the lyrics seem to come out. That makes it PRONG, that makes it different, but obviously like you said, there's been a lot to pick and choose from. But it's all fake news anyhow. It's amazing. This is a Canadian show, or web site, so I don't know how slanted the news is up here, but it's unbelievable in America, where just a change of the channels you get a completely different perspective on everything. It's all paid off by somebody. Somebody is putting these knuckleheads on television to say what the advertisers want and the people with the money behind it who want to get their agendas across. It's an absolute joke. That's a stimulus for a lot of the lyrics right there. On '[X -] No Absolutes', which is the last record, we played this song tonight, 'Cut And Dry', it's about that. You're told something, then you believe it, then something happens that's contrary to your belief and then you're like, 'What happened?' I was like 'Well, you're an idiot. You listened to this nonsense to begin with.'"

On why PRONG has been so prolific of late:

Tommy: "It's a little bit because of the climate of the music industry and because of the hiatuses. I feel that artists today have to be constantly on the move at a quicker rate than we used to because of attention levels and the amount of material that's out there. To keep smashing people with new records, I think that's a cool thing just on a conceptual mentality of what bands have to do these days. From a management standpoint of what I think you have to do and then we have a lot of mends to be made because there was several periods where we didn't do anything. I was involved in other projects or I was just lazy, so I think there's a plethora of PRONG fans out there and they're coming out of the woodwork now. There's a lot of distrust in the band. People are, like, 'Oh, yeah, they put a record out now and let's see how they do with the next one.' 'Oh, they put another one out.' 'Yeah, but let's see how they do.' It takes a while for people. There's a lot of people who have no idea that we have been putting out records either, so the more we put out and more frequently, the more people are going to be back on board."

Tommy: "Initially, the idea of again, getting off a tour and going right back to work is something that I wasn't essentially looking forward to doing. I'd rather be at the pool or at the beach or something, but I couldn't do that because of just how driven we are to make amends and to stay current and keep putting out records along the lines of the concept I was just talking about."

On his dream collaboration:

Tommy: "One of my big heroes is Jaz Coleman from KILLING JOKE. I always say if anything happens to Geordie Walker, who is one of my favorite guitar players from KILLING JOKE, I'd love to step in and do that gig. That would be a lot of fun."

"Zero Days" will be released July 28 via Steamhammer/SPV.