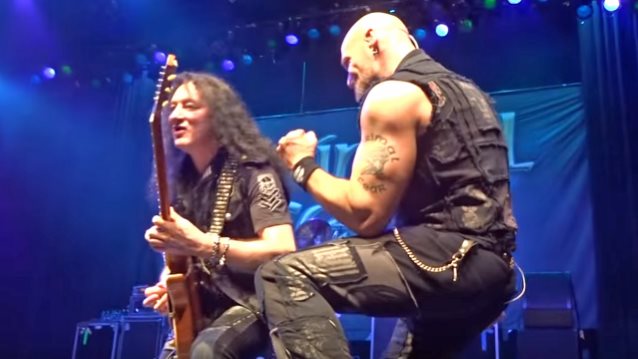 German power metallers PRIMAL FEAR are planning to release new concert DVD and CD in 2017. The band's producer and bassist Mat Sinner told Roppongi Rocks: "We've recorded a concert for a DVD and live CD, and this will be the next project. When we stop touring, we will mix it and this will be released next year. Last time we recorded a live album in America, so this time we said we'll do it in Europe."

PRIMAL FEAR's new album, "Rulebreaker", was released on January 29 via Frontiers Music Srl. The effort was made available in CD, deluxe CD/DVD and — in collaboration with Soulfood Music in Germany — on vinyl and a special super-limited vinyl edition featuring an eagle sculpture on the vinyl.

PRIMAL FEAR last year parted ways with Brazilian drummer Aquiles Priester (HANGAR, ANGRA) and replaced him with Francesco Jovino (U.D.O.). In addition, founding PRIMAL FEAR guitarist Tom Naumann — who had been touring with the group for a couple of years — had officially rejoined the band as a full member.