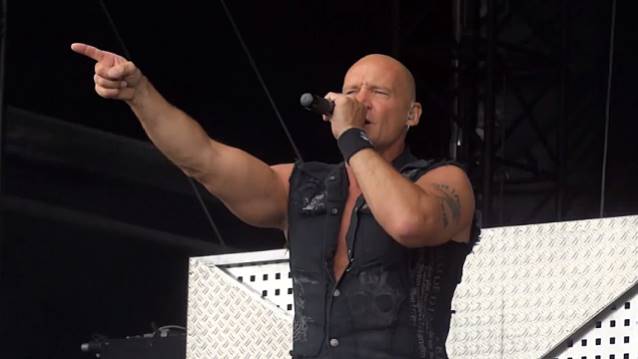 Fan-Filmed video footage of PRIMAL FEAR's June 27 performance at the Graspop Metal Meeting in Dessel, Belgium can be seen below.

The band's tenth studio album, "Delivering The Black", sold around 1,000 copies in the United States in its first week of release, according to Nielsen SoundScan. It landed at position No. 16 on the Top New Artist Albums (Heatseekers) chart, which lists the best-selling albums by new and developing artists, defined as those who have never appeared in the Top 100 of The Billboard 200.

PRIMAL FEAR's previous effort, 2012's "Unbreakable", opened with around 600 units in the United States. It entered the Top New Artist Albums (Heatseekers) chart at No. 44.

"Delivering The Black" was released on January 24 in Europe and January 28 in North America via Frontiers Records.

After some very intense songwriting sessions and pre-production schedule, the band started to record the new CD in summer 2013 at the House Of Music studios in Germany, with bassist/producer Mat Sinner and engineer Achim Köhler (EDGUY, MASTERPLAN). The band then moved to Denmark in September to finish the album, with acclaimed producer/engineer Jacob Hansen (VOLBEAT, PRETTY MAIDS, AMARANTHE) handling the mix at his Hansen studio in Ribe.

"Delivering The Black" was made available in a regular CD edition, deluxe edition with two bonus tracks and — in cooperation with Soulfood Music — vinyl edition and DVD and limited edition (666 copies only!) of a super-deluxe version, including a metallic eagle.

PRIMAL FEAR guitarist Magnus Karlsson is sitting out the band's touring activites during 2014 so that he can spend more time with his "little kids." Filling in for him is PRIMAL FEAR's founding member Tom Naumann.