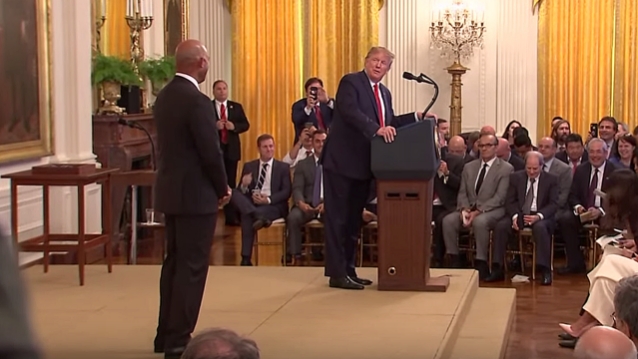 METALLICA's smash hit song — which the longtime Yankees closer used as his walk-on music when he came on to close games throughout his baseball career — played for more than a minute as Rivera and Trump took the stage.

After introducing Rivera as "the sandman," Trump told a story of when he explained to first lady Melania Trump why the Yankees legend went by the nickname.

"Because he put the batter to sleep," Trump said. "A lot of people don't know that, but the Yankee fans know that."

Several years ago, Rivera admitted that he didn't even listen to METALLICA's music.

"I never said that I didn't like it, but I didn't care about the song," Rivera said. "I didn't pick the song. I don't pay attention to the music. When I go in there, I'm going to business. I have a job to do, that's it."

According to NBC News, the Yankees stumbled into using "Enter Sandman" for Rivera's entrances because they were trying to copy the Padres' use of "Hells Bells" for Trevor Hoffman. They initially tried "Welcome To The Jungle" and "Paradise City" by GUNS N' ROSES, but weren't satisfied with the crowd reaction. Then a freelance member of the scoreboard production team brought in some CDs and suggested "Enter Sandman".

Both METALLICA drummer Lars Ulrich and guitarist Kirk Hammett have voiced their dislike of Trump to different degrees, unusual for a band whose members have never spoken out much on politics.

After Trump — one of the most polarizing figures to assume the office — was officially sworn in as the 45th president of the United States in January 2017, a number of celebrities took to social media to share their thoughts, including Hammett, who urged fans to "defend democracy" and "reject American carnage."

In a series of tweets, the METALLICA guitarist was critical of Trump's inaugural address, which painted a bleak picture of life for some in the United States. "To say America is not great, that it lacks greatness, sets up a scenario for manipulation and control from others —pay attention, people!" Hammett wrote.

In October 2016, Ulrich said he would consider moving back to his native Denmark if Trump were elected president.

"I am a hundred percent Danish citizen. I pay taxes in the U.S.A., but I can't vote in America," he said. "Yes, certainly sometimes I think about moving home to Denmark… If Trump becomes President and everything goes to shit, I might make my way to the airport and ask if I can get back in again."