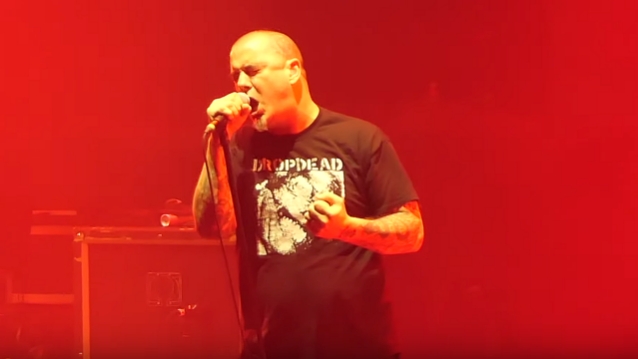 Fan-filmed video footage of PHILIP H. ANSELMO & THE ILLEGALS's entire November 3 concert at PNC Arena in Asheville, North Carolina as the support act for SLAYER can be seen below (courtesy of YouTube user "Dennis Justus").

This past summer, Philip Anselmo spoke to Revolver about his decision to play a number of PANTERA songs during the current tour with his solo band, PHILIP H. ANSELMO & THE ILLEGALS.

"We were about a month out from touring [the second ILLEGALS album, 'Choosing Mental Illness As A Virtue'] when Vince Paul [Abbott, PANTERA drummer] passed away and that was horrific and so unexpected," he said. "It was something that stopped me dead in my tracks. I was in my kitchen and I just dropped to the floor and just had to breathe for a little while. That's when the big plea for us to do more PANTERA songs became irresistible. The tribute had to be then. It had to be right. And I never thought it would be THE ILLEGALS. Clearly the mission for us was to be a sweaty hole-in-the wall death-metal band. I've got to say huge props to them for learning the PANTERA material. They didn't even flinch, man, and just went for it.

"The vibe from most of the shows have been so fucking great, man," he continued. "And what really tickles me is seeing the young bloods out in the audience, freaking out on the PANTERA stuff. And you know it's their parents who got them into PANTERA."

On the topic of whether his PANTERA tribute will continue into the future, or if it's something he is doing right now, Anselmo said: "I'd like it to be just for now. For me, PANTERA was PANTERA and there's no substitute. So playing those songs, I didn't mind doing it for a one-off thing here and there with a group of guys — we used to do it in 'Metal Masters', [with] Kerry King and the ANTHRAX guys. But I wasn't going to learn a set of PANTERA with another band. I didn't feel entitled to do that. It's not like I feel entitled now. I feel now it's necessary."

Asked if Vinnie's death made him think any differently about the PANTERA days and the aftermath, Anselmo said: "The only thing I can say is, if I could go visit a 20-something-year-old version of myself, I would say, 'Put the fucking bottle down, son.' Treat your body like an elite athlete and make sure that there is a very clear communication between myself and the rest of my band.

"It's a frustrating thing because my lower back injury was so fucking bad, it was torture from the second my eyes opened until I fell asleep," he said. "I made every rookie mistake in the book. I ended up sleepwalking through the fucking day because I didn't want to exist. It felt like my skeleton had betrayed me. It was a common lower injury, a blown-out disc. It was just at the wrong time — [1994's] 'Far Beyond Driven' was just getting wrapped up. And once I got that phone call, 'Hey, your record's No. 1,' I knew what was going to happen — world tour after tour after tour. That was the big dream anyway. And I couldn't do it, man. Neurosurgery was still barbaric at that time. I had to wait until 2006 to have any surgery at all and by then three discs had blown. I had the second surgery in 2018. I'm doing tons better now. You're thrust into a circumstance and I wouldn't wish that on anybody, man."

Up until his death in June 2018, Vinnie remained on non-speaking terms with Anselmo, whom the drummer indirectly blamed for the death of "Dimebag" Darrell Abbott, who was his brother.

Vinnie Paul died of dilated cardiomyopathy, an enlarged heart, as well as severe coronary artery disease. His death was the result of chronic weakening of the heart muscle — basically meaning his heart couldn't pump blood as well as a healthy heart.

Vinnie was buried on June 30, 2018 next to his brother and their mother, Carolyn, at Moore Memorial Gardens Cemetery in Arlington, Texas.