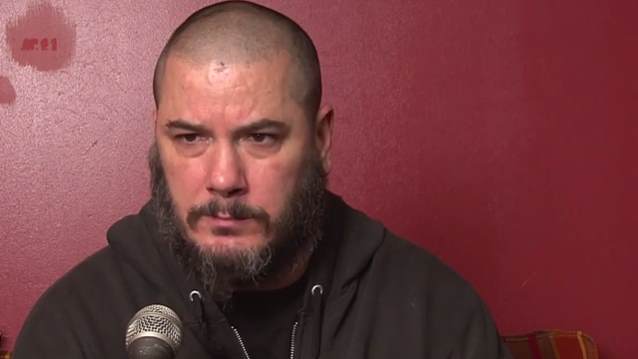 Former PANTERA and current DOWN singer Philip Anselmo spoke to Artisan News about DOWN's recent lineup changes and the making of the band's new EP, "Down IV - Part Two". You can watch the report below.

DOWN's video for the song "We Knew Him Well", which features the band tearing up the track in close quarters, was directed by JM Stelly and produced by Chris Trainor for LabProductions. Stelly previously worked with TO KILL A PARTY and Jason Martin while Trainor has collaborated with GWAR, PHILIP H. ANSELMO & THE ILLEGALS, Discovery's "Sons Of Guns", and is the producer of Housecore TV.

Tracked at Nodferatu's Lair — Anselmo's home studio — and produced by Michael Thompson, Anselmo and DOWN, "Down IV - Part Two" is the eagerly anticipated sequel to "Down IV - Part One". The new offering from DOWN is packed with the quintet's signature gargantuan riffs, swamp blues leads, crashing drums and hypnotic howls, upholding a certain tradition that countless fans celebrate, expanding their own musical mythos as they leave its pillars intact and untouched.