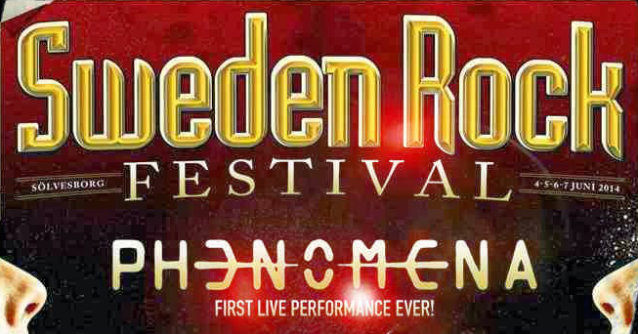 Six months after it was announced that PHENOMENA — the rock project formed by record producer Tom Galley, would make its first-ever live appearance at next year's edition of the Sweden Rock Festival, set to take place June 4-7, 2014 in Sölvesborg, Sweden — the event's organizers have released the following statement:

"We regret to inform you that there will be no PHENOMENA concert at Sweden Rock Festival 2014.

"Our contract for PHENOMENA's appearance at Sweden Rock, which was signed by the person who sold us the show, clearly states that a specific lineup would be participating. Unfortunately, it has come to our knowledge that, contrary to our what we were previously led to believe, no deals between the PHENOMENA representative and some of these specific artists were ever finalized, and a couple of these key performers have let us know that they will not be able to participate. We have also been made aware that two different parties are claiming to own the rights to the name PHENOMENA, and that the person who signed the deal with us may not have had the right to do so. In the light of all this, we have decided to cancel the PHENOMENA concert.

"We deeply regret having to make this decision, but we feel that these musicians are such a vital part of this project that it would not be right to our audience to let the show go on without them.

"If a PHENOMENA live show with a relevant cast, that can be verified independently by all parties involved, is put together in the future, we will naturally do what we can to give our audience the chance to see PHENOMENA then instead."

The story began in the year 1983 when Tom Galley wrote a couple of short stories with a transcendental background. Backed by record label Bronze, the recordings for the album "Phenomena" started soon which finally hit the stores in 1985. Besides the extraordinary concept story, both musicianship and the names involved with the project are highlights to mention. Names such as Glenn Hughes, drum legend Cozy Powell (RAINBOW, WHITESNAKE), Don Airey (DEEP PURPLE), Neil Murray — the elite of the British hard rock scene — had joined the project. "Phenomena" received high critical acclaim in the press and extremely good sales.

The second PHENOMENA album, "Phenomena II - Dream Runner", was released in 1987 and was welcomed with a similarly warm response. The musicians around the Galley brothers had changed slightly, so that this album in the end featured contributions from Ray Gillen (BADLANDS, BLACK SABBATH), John Wetton (ASIA), Scott Gorham (THIN LIZZY) and Max Bacon (GTR), amongst others.

With new label Parachute involved, in 1991 the time was right for "final part" of the conceptional story; "Phenomena III - Inner Visions". Besides Brian May (QUEEN) and Keith Murrell (AIRRACE), you'll here also find performances by Michael Sturgis (A-HA) and Scott Gorham (THIN LIZZY). "The Complete Works" were released in a triple fold-out digipack by Escape Music.

However, the PHENOMENA concept continued in 2006 under the banner "PsychoFantasy", which strictly follows the traditions of its three predecessors. Besides the concept story background, you will once again will find a whole bunch of amazing artists performing on this record: Tony Martin (BLACK SABBATH), Glenn Hughes (DEEP PURPLE), Keith Murrell (MAMA'S BOYS) and Mel Galley (WHITESNAKE, TRAPEZE).

In September 2010, a new chapter began with a whole host of musicians, and "Blind Faith" was born to explosive effect. With new vocalists like Robin Beck, Terry Brock (STRANGEWAYS) and Rob Moratti (SAGA), a whole new world was unveiled and the concept became so fresh again. The rock audience once more were thrilled to hear the latest in this timeless story.

In 2012, PHENOMENA released "Awakening", an album chock-full of new ideas and featuring James Christian (HOUSE OF LORDS), Lee Small (SHY) and Toby Hitchcock (PRIDE OF LIONS) as well as familiar faces like Rob Moratti, Terry Brock and Mike DiMeo. Powerful songs executed by some of the finest rock musicians make this a hugely enjoyable album and it boasts a fine production from Tom Galley and Martin Kronlund.