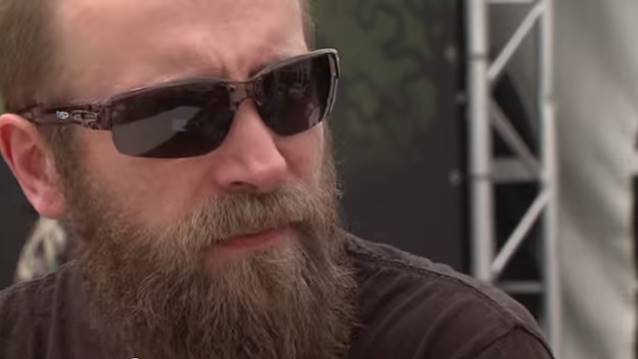 Skynet conducted an interview with vocalist Nick Holmes of British gothic metal pioneers PARADISE LOST on June 29 at the Graspop Metal Meeting in Dessel, Belgium. You can now watch the chat below.

From the harrowing doom of their 1990 debut, "Lost Paradise", to 1991's genre-defining "Gothic", to 1995's break-out masterpiece "Draconian Times", to 1997's electronically tinged "One Second", to 2007's return to a heavier form "In Requiem", to 2012's opus "Tragic Idol", PARADISE LOST have continued to evolve since their inception in 1988, inspiring countless artists throughout the years. To celebrate their influence on the scene, a special compilation was released last fall to commemorate the band's 25th-anniversary landmark. Titled "Tragic Illusion 25 (The Rarities)" , this album was released on October 21, 2013 in Europe (digitally on October 29, 2013 in North America) and features artwork by Parisian designer Valnoir, who has worked with artists such as ORPHANED LAND, MORBID ANGEL, WATAIN, and more than 150 others. All tracks found on the compilation are previously released rarities — except the new track "Loneliness Remains", and newly recorded "Gothic 2013" and "Our Saviour 2013".

"Tragic Idol" sold around 900 copies in the United States in its first week of release. The CD landed at position No. 32 on the Top New Artist Albums (Heatseekers) chart, which lists the best-selling albums by new and developing artists, defined as those who have never appeared in the Top 100 of The Billboard 200.

Released in April 2012 via Century Media Records, "Tragic Idol" was recorded in part at The Chapel studios in Lincolnshire, England and features cover art by by Parisian designer Valnoir, who has previously worked with MORBID ANGEL, LAIBACH, ULVER and WATAIN, among others.