PAPA ROACH has announced a new European tour with HOLLYWOOD UNDEAD. Returning to Spain, Italy, Switzerland, Germany, Austria, Bulgaria, Hungary, Slovakia, Poland, France, Netherlands and Denmark, and coming to Greece and Romania for the first time, the band will be playing tracks from its latest album, "Who Do You Trust?", including the title track, the exhilaratingly chaotic "Renegade Music" the soaring pop of "Not The Only One", and a return to frontman Jacoby Shaddix's MC roots on fan favorite "Elevate".

Commented Shaddix: "This tour is long overdue — fans have been pleading for us to tour with the HOLLYWOOD UNDEAD dudes — so we're gonna give the people what they want. Europe has had some of our most favorite shows ever and the energy is always insane. We can't wait."

Tickets go on sale to fans on October 30, and general sale on November 1. Artist-specific VIP packages are on sale now.

"Who Do You Trust?" has been described as one of the most eclectic albums of PAPA ROACH's career, ambitiously spanning a wide range of sounds and styles. The disc arrived in January via Eleven Seven.

Shaddix confirmed to HardDrive Radio that PAPA ROACH will celebrate the 20th anniversary of its breakthrough album, 2000's "Infest", next year.

The band's second full-length record and first major label release, "Infest" peaked at No. 5 on the Billboard 200 chart and has been certified triple platinum for sales of three million copies in the U.S. alone. It featured the massive hit single "Last Resort". 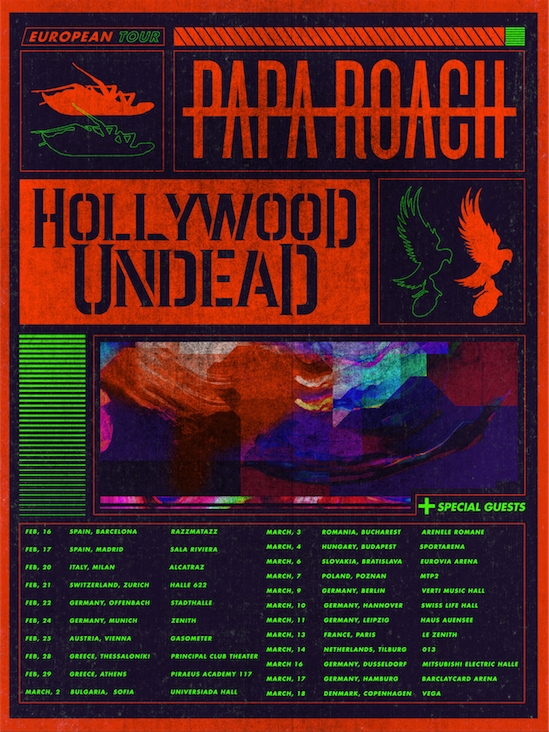